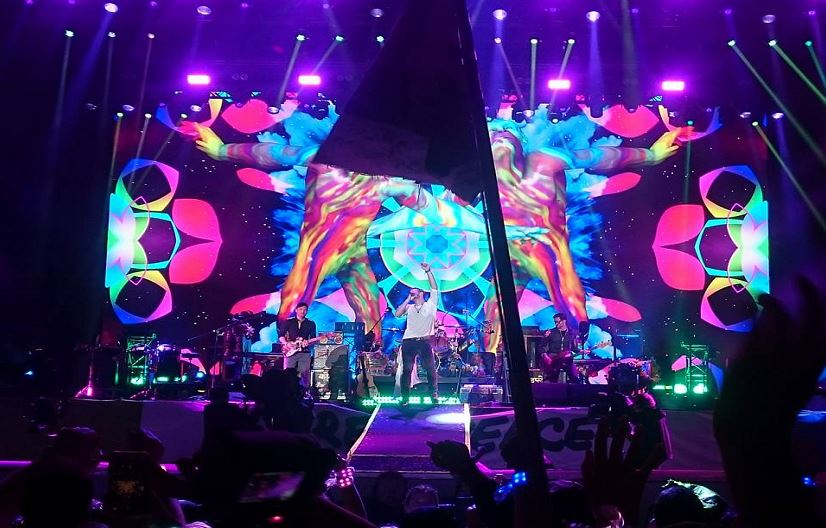 Unless you have been living under a rock, you know the highlight of the Global Citizen Festival in Mumbaiis COLDPLAY! Finally, one of the biggest bands are going to perform in the country on 19th November, and we couldn’t be more excited. Get concert ready with awesome Coldplay merchandise and their greatest hits on your playlist!

Here are 10 of bands’ songs that we are majorly crushing on in anticipation of the concert!

The song is a fun and upbeat number that is bound to  make you happy. The video pays tribute to silent films and features imagery related to stage magic, including a levitating couple, a flying deck of cards and a theater stage. The single art for Magic was etched by British-based, Czech etching artist Mila Fürstová. The artwork features a symbolic white dove imposed onto a blue background.

Chris Martin described Up & Up as a song that the band had ‘been waiting 15 years to write’. Up&Up is an encouragement song, inspiring one to never give up. The song also features former Oasis songwriter and axeman Noel Gallagher on guitar and Beyoncé  for the background vocals

Chris Martin about Sky Full of Stars said on Fuse: “What that song represents on Ghost Stories is the release after you’ve climbed the mountain – after you’ve done anything challenging. That’s why that song is so unashamedly happy and danceable: because that’s what it needed to be. I love singing it. I know we didn’t break the mold, but it’s just so fun to play.”

This song was co-written and co-produced by Avicii, and was Coldplay’s first dance track with EDM and House influences. Perfect for anyone in a party mood!

7. Hymn for the Weekend

Hymn for the Weekend was the talk of the town and an instant hit.

The Ben Mor-directed video was filmed in MUMBAI, INDIA! It features Beyoncé playing a Bollywood star and glimpses the religious holiday of Holi, and you can also catch our very own Sonam Kapoor at  3:36 in the video.

A fun one, it’s one of their most popular songs!

6. Every Teardrop is a Waterfall

ETIAW is a motivational and upbeat song, and can mean a lot of different things to different people. It talks about turning the negativity into positivity, getting through hardships and the power of music to help overcome problems. YOU CAN’T MISS THIS ONE!

At the 2012 MTV Video Music Awards on 6 September, Paradise won the award for Best Rock Video. Paradise is the perfect song for any one who seeks just a little bit of positivity and inspiration to get through a bad day.

Album: Viva la Vida or Death and All His Friends

This song has the distinction of being not only the band’s only Number One hit on Billboard’s Hot 100 sales chart, but also the first Number One single by a British group since 1996. It was written by all 4 members of the band, and both the song and the artwork follows a theme of revolutionaries and guerrillas. It was the title track and single from their fourth studio album, 2008’s Viva la Vida or Death and All His Friends — named after a Spanish phrase meaning “Live the life” and featuring an album cover of a painting of a battle from the French Revolution

Year: A Rush of Blood to the Head

One of the most beautiful songs about love and regret, this song still manages to give us goosebumps each time we hear it. Did you know that the video was shot normal direction and then played backwards, while Chris sang the lyrics to the song backwards. It is one of those songs you just want to sob to when loves gets too hard.

This is where where it all began, with their very first Top 10. Coldplay’s breakthrough hit went straight in at Number 4 and was taken from their debut album Parachutes, which has sold over 2.6 million copies. Yellow is one of the most romantic songs of all time, and the soulful lyrics will make the strongest disbeliever of love believe in it.

Probably Coldplay’s most famous songs, Fix You was released in 2005, and has shifted over 679,000 copies. It was supposedly written by Chris Martin for Gwyneth Paltrow on her father’s passing. The death inspired this song – it is about grief and coming into terms with a loss of a loved one. The lyrics are still relatable for anyone going through a hard time in any phase of life, and our go to song on a bad day.

Which Coldplay song is at the top of your playlist? Do let us know in the comments down below!

P.S. You can get awesome merchandise for all of these songs and more designs inspired by the greatest band ever – see all Coldplay merchandise.