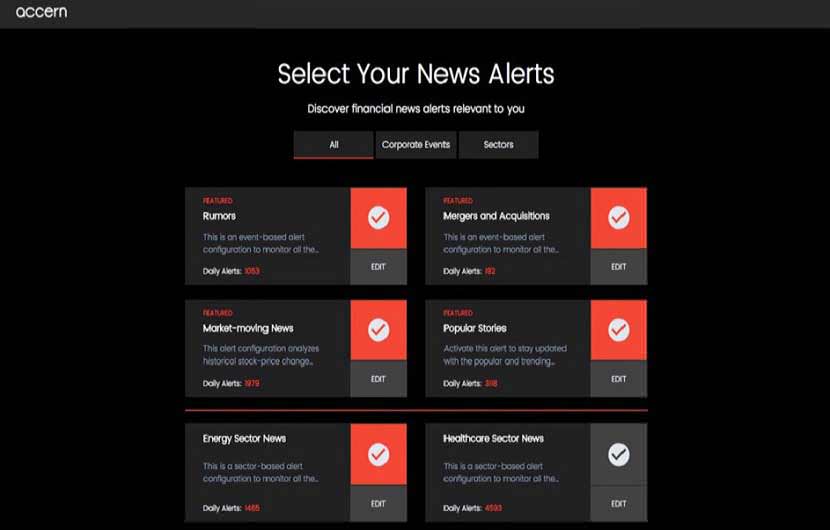 According to a VentureBeat report, Accern cofounder and CEO Kumesh Aroomoogan, said, “Right now we’re working with many multibillion dollar hedge funds and banks to consolidate all their existing news subscriptions feeds into a centralized news platform, we then curate the news using our artificial intelligence technologies to help them find the most relevant stories on stocks they are tracking.”


There are reportedly 500 active users using the platform and these financial institutions pay around $500 per month. Along with obvious competitors like Dataminr, could data services like Reuters and Bloomberg also be considered competition for the startup? Aroomoogan says “Bloomberg and Reuters are not competitors but a complimentary news service for Accern,” he goes on to add, “A lot of firms are already subscribed to these news sites, and we are basically consolidating that data on our platform.”

The company says it tracks more than 300 million websites, social networks like Twitter and Tumblr, and SEC filings in real time.

Accern plans to go beyond just financial services and create a platform that would help clients “understand the buzz around internal controversies.” This would help brands bring order from chaos, so to speak, from all the reactions and messaging to understand the sentiment better. Without providing specifics, Aroomoogan named IBM as their first non-financial customer.

Accern was founded in 2014 and currently has 12 employees, they will be using the investments raised to increase their AI capabilities in order to monitor more news and on-board more data scientists and engineers.