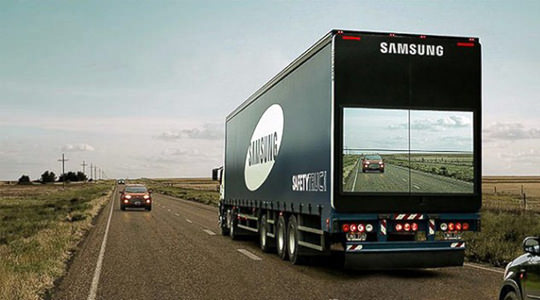 In 2009, Russian design house Art Lebedev introduced the Transparentius concept for improving road safety. It had a remarkably simple concept: put a camera on the front of large, slow-moving trucks and connect it to video displays on the back, thereby informing trailing drivers whether it’s safe to overtake. That’s the exact same idea that Samsung is now pursuing with a new prototype truck. Making use of its abundance of outdoor displays, the Korean company has stitched together a video wall of four displays at the rear of the truck, which transmits video captured by a wireless camera at the front.

Samsung says it’s now working to obtain regulatory approval for the deployment of its so-called Safety Truck, however the idea doesn’t appear economically practical at large scale. The camera might be cheap and simple enough to install, but four displays per truck would be a major investment for any transport company to make, especially since it wouldn’t lead to any direct financial benefit. Still, it’s impressive that Samsung has managed to overcome the technical challenges (like solar glare) of realizing this otherwise laudable idea.

A more realistic solution to improving information while driving will be provided by Vehicle-to-Vehicle communication systems, which are expected to arrive in US cars next year. This is a form of networked intelligence whereby your car transmits data about its position, direction, and speed, and receives the same about cars around it. It can thus issue alerts about unsafe driving by others or notify of any collisions ahead even before any other drivers have had the time to react. In that way, V2V does even more than just give you vision the way Samsung’s Safety Truck would, though making big trucks transparent is undoubtedly a much cooler application of technology.