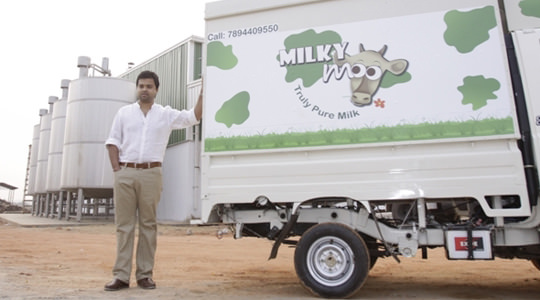 Milk Mantra, an Odisha-based dairy product company is entering the national dairy market by launching MooShake, a dairy-based health beverage. MooShake is made with a special blend of curcumin, an extract of turmeric, which is believed to have multiple health benefits. Backed by Fidelity Growth Partners, Milk Mantra has now stepped into the dairy-based functional health-category space with ready-to-drink milk beverage which has a longer shelf life.
Mooshake has been launched in four different flavours in Bengaluru and is planned to be launched in other major cities in the next few months.

“This is the world’s first such beverage with curcumin in it. Each pack of MooShake contains 0.05 per cent pure curcumin, an extract of turmeric which is anti-inflammatory, immunity booster and also sometimes believed as a natural medicine for preventing cancer. We have done almost three years of research and development to come out this complex product and make it shelf stable and tasty,”” said Srikumar Misra, Founder & Managing Director of Milk Mantra he added.

Milk Mantra was founded in 2011 by Misra, a former senior executive at Tata Group but it took two years for the company to build a proper infrastructure and set-up to process fresh dairy. Milky Moo, the company’s first fresh dairy product was launched in early 2012. After that, the company has come out with various dairy-based products such as paneer, probiotic yoghurt and lassi. While Milky Moo, the fresh dairy product is largely available Odisha, the value-added products like paneer and yoghurt are currently selling in other parts of Eastern India such as Kolkata, Ranchi and Jamshedpur.

Milk shake is estimated to be valued at approximately Rs. 1000 crore category in India at present. Apart from big players like Amul, Nestle and Britannia, there are numerous smaller local companies.