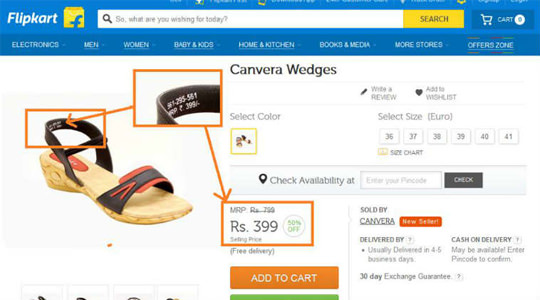 It all started with Flipkart’s Big Billion Day sale. E-commerce portals have come under heavy public criticization due to their misleading and tempting pricing policies. Anyone who browses through the sites of Flipkart, Snapdeal or Amazon will be faced by discount policies that are too good to ignore.

Flipkart has yet again come under the radar for providing false information regarding the pricing on its products. Facebook user Mani Shankar Sen brought an issue of fake discounts to the public that showcased how e-commerce portals create a semblance of huge discounts by intentionally increasing the prices of products.

Sen put up a screenshot from Flipkart’s site that showed a pair of canvas wedges with their price increased to 799 and a discount of 50 per cent. However, on closer inspection of the shoe, the actual printed price was found to be 399 itself. In other words, the discounted price is the actual MRP.

Sen wrote on the Flipkart page : “Dear Flipkart Team… Whenever we think of online shopping, we definitely check your site first for the product availability. You have built huge brand value in India. But these incidents damage customers’ trust factor, as well as your brand value. Please see the picture attached…”
Flipkart quickly replied to Sen’s query and stated that the problem would be rectified. As of now, the aforementioned product has been taken down from the site.

In another case, Twitter user Sunil posted screenshots that once again showed incorrect information regarding discounts.

Hey @Flipkart , thanks once again for the MIND BLOWING discount! pic.twitter.com/6NsMjP3dsb

This is not the first time that such an event happened. Recently, the Yu Yureka smartphone was launched in India. Amazon had priced it at Rs. 8999 but due to a technical glitch, a few users had to pay Rs. 12,999. However, Amazon later apologized for the issue and returned the extra money to the users in the form of coupons.

Despite the massive contribution of e-commerce to the start-up industry and the rapid growth seen in most of them, such issues will not be taken lightly by the public. Whether they are technical glitches or cunning tactics to boost sales, e-commerce portals need to cater to these problems to ensure their reputation and fanbase stays intact. For now, Flipkart seems to have solved the problem.