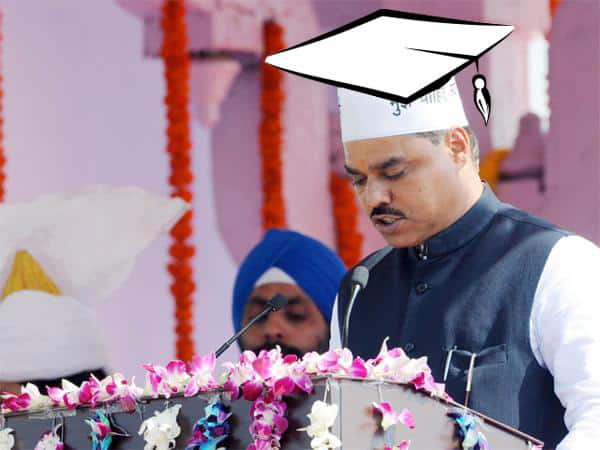 Fresh from Gajendra Singh’s suicide during the AAP rally, Delhi’s ruling party is back in the news for having Delhi Law Minister Jitendar Singh Tomar accused of having his law certificates fabricated. Bihar’s Tilka Manjhi Bhagalpur University sent an affidavit to the Delhi High Court on Monday stating that Tomar does not have a legitimate degree and is not listed in the university’s records.

Tomar strongly declined the charges and retorted back by accusing BJP of plotting a conspiracy against AAP. He went ahead to say that he will not be resigning and is ready to appear before the jury to prove his innocence.

“My degree is 100 percent genuine, I have all the documents to prove it and I will not resign from the post. When the court will summon all the records and registers everything will be clear” said Tomar. Spokesperson Nagendra Sharma further said “The law minister is willing to cooperate and will provide the documents when asked. The matter is sub-judicial and next date of hearing is on August 20. I think we should wait till then.”

Meanwhile, BJP and Congress both demanded a resignation from the minister along with bookings under charges of corruption and fraud. Strong statements were heard from both parties. “If Arvind Kejriwal fails to remove the law minister and take moral responsibility than tomorrow, we will hold a massive demonstration outside the Delhi Secretariat,” said Congress leader Ajay Maken.

Things took a turn for the worse when The Bar Council of Delhi informed the High Court that Tomar’s license has been suspended. This was made on the grounds that revealed Tomar’s B.Sc degree from Dr. Ram Manohar Lohia Avadh University as fake.