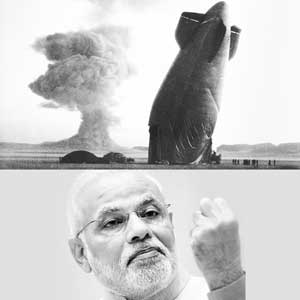 India is not the moon; this is not a debate on Neil Armstrong landing or conspiracy theorists disputing. India is a country of 1.2 Billion real people, real people who have businesses, jobs, who eat, who cry and have families. Who not necessarily have a bank account leave alone a social media profile on Facebook and Twitter to like or share Narendra Modi Mobile APP or follow Narendra Modi Video conferences at rock concerts over the presence in Indian Parliament.

Demonetisation too like Swatch Bharat, Startup India, and Digital India appears to be an activity from a PR Plan that was put together by publicists. For everyday people to understand PR aka Public Relations Campaigns can make or break the same product/personality/brand. At one time they can position it like the best and on the other the same thing as the worst. But they may polish things from outside but can never influence the quality of the product/brand/personality itself. The rot always surfaces, the question is after how much damage?


With a series of numbers shared by responsible sources and data quoted by many from RBI’s website and the disclosure itself, the synopsis clearly indicates that this move was ill-conceived, was not thought through, and has only unleashed mayhem on ordinary people including 53% who don’t have a bank account. Many responsible, intelligent people in the government were clearly not consulted else why would many RBI governors come out opposing this move. The matter of impact on influential, however, is speculation on who all knew and who all didn’t. Enough tweets of people putting up 2000 rupee notes surfaced online days before the PM announcement, a clear indication for you to look for what is wrong if you wish to.

What did PM Modi mean by ‘Minimum Government Maximum Governance’ the situation across aspects has become so grim that the phrase has transformed to be ‘Intrusive Bedroom Government, Media Blitzkrieg Governance.’

Many media houses who pull out ‘GATE’ from Watergate to name every scandal in India, tried to use the word surgical strike i.e. Surgical Strike on Black Money. This is nowhere a surgical strike; these buggers need to play some video games. This is nuking an entire city to kill two Zombies. It’s like Iron Man deciding to let the Nuke hit New York City over taking it into the wormhole.

Businesses are down, people don’t have money, deaths are being reported, black money exchanger business is thriving and making more money, a dozen loopholes are being exploited, and smelly Rs. 100 notes are being distributed to ordinary people after standing hours in a queue. Productivity is down, working hours are lost, and foreign tourists are clueless.

While all this happens Political Parties, continue to collect unaccounted funds in cash. The real statesman and meaningful step would have been banning cash donations to political Parties and bringing the political parties under RTI.

We need to accept it that we are Human Guinea pigs in the PM Modi Lab of research. But whatever may happen, the divisive leadership that took over in 2014 continues to divide people. It’s like the story of two cats fighting and the monkey winning.

But whatever may be the case, call it a bold, historic move, over a calculated move, the government scores 100% on PR. As this debate in a few months will end with reports surfacing that some hundreds of Lacs have come into the banking system. A fact dangerous when presented in isolation but will be submitted.

Cancel reply
Exclusive: Hiring in media and entertainment industry in need of democratisation – Vineet Bajpai, Talentrack
Online shopping is increasing in India and will soon be a ‘Cashless Society’