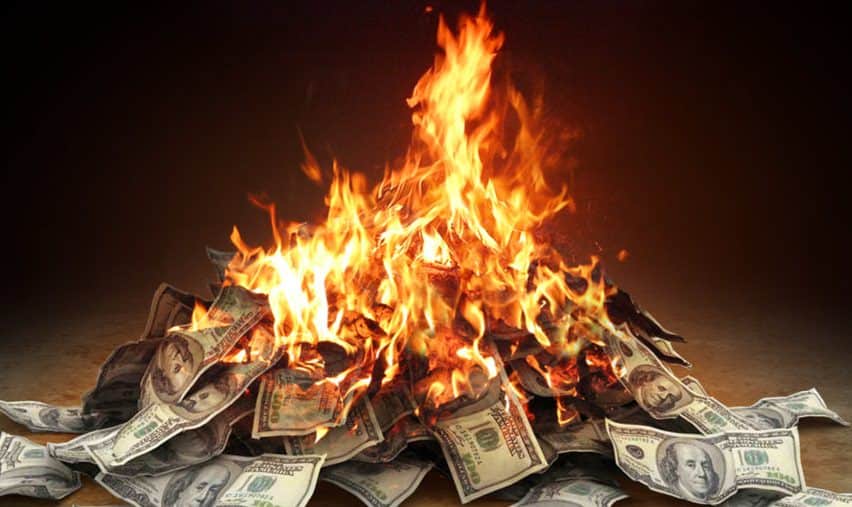 The rate at which investments were poured in Indian startups last year enabling them to expand vastly and aggressively across all major countries and hiring highly-estimated individuals at top level posts has soon diminished this year with the cash burn rate factor seeping in.

With investors growing overly cautioned and tight-fisted, expenses on operational costs, salaries, increments have taken a trim and the cash burn rate took more seriously. Among those now taking it seriously are online marketplaces Flipkart and Snapdeal.

Having reduced the cash burn rate by over one-third aware of the changes afoot in Indian internet companies, Flipkart, which is valued at an estimated worth of over $15 billion (Rs 1 lakh crore), has managed to trim burn rates from a peak around $80-100 million per month in the last quarter of 2015 to around $50 million now. Snapdeal has also been able to cut its burn rate by as much as 40% compared to last year.


Of course, all these came at a cost. Days after Flipkart told new campus recruits it was deferring their joining dates to December from June due to a restructuring exercise, the Indian Institute of Management, Ahmedabad , had sent a strongly worded email to the company urging Chief Executive Officer Binny Bansal to guarantee that the candidates do indeed have a job when the date of joining is finalised. Reports also say that Flipkart is almost certain to be removed from the prestigious Day One slot at the top institutes of IITs.

Last year, Zomato was insistent that it be included in the Day One slot at IIT-Delhi. It was turned down and its CEO Deepinder Goyal expressed his displeasure in an outburst on Twitter. IITs subsequently blacklisted Zomato and did not allow it to hire on campus.

High burn rate is one of the primary reasons why startups shut down. Burn rate, as defined by experts, is the amount of money a company is either spending (gross) or losing (net) per month. Fortunately, it is not something inevitable, if an entrepreneur can get his strategies pre-planned, rightly executed and above all, have patience.

Here are some of the points every entrepreneur should keep in the back of their mind after acquiring huge investments and before pumping them out in the expansion.

1. Don’t be a trend-follower– India has majorly been a follower of the west. From coming up with startups to investing in one, we have always imitated them. The truth is that the term ‘Unicorn’ was coined by the US investment community to signify a startup that’s valued at $1 billion or more, thus by definition making them a rarity. Startups like that are ought to be a difficult hunt by investors, for potential ‘Unicorns’ more and more difficult to erupt.

Not everyone can be rare making themselves an open target for investors’ radar. Zomato had gained the ‘Unicorn’ back in 2014. It recently laid off employees in the US as a price for its high burn rate including the cost at which it was acquiring customers. It has also cut operating costs from $9 million to $1.7 million taking a host of measures, which also includes pulling out from nine countries like the US and the UK. Zomato now has feet-on-the-street (physical presence) in 14 counties, which were 23 last year.

The idea should be to play the ‘survival game’. Rather than following other success stories, a more real parameter should be focusing on building products, dealing with competition and being lean and nimble on the assumption that future funding may not be available.

2. Choosing the right team- One look at the big multinational multinationals will aptly reflect the fact that it is prudent to hire remote talent first. And it does not stop there, those companies also have provisions for their employees to work from home and at flexible hours so that they get the best from them. This not only brings out the potential of an individual but also saves the office overhead expense in cities like Gurgaon, Bangalore or Mumbai, where both the cost of living and doing business is exorbitant.

Startups must enlarge their talent pool only when they include professionals that have the skill set but are not physically close to the startup’s location. There has been a rising trend in startups making their base in smaller Tier 2 and 3 cities.


3. Control the marketing budget- It’s known to be a ruthlessly competitive market outside with each and every startup obsessed like zombies to engage for customers, visitors, and users on their platform. Marketing surely does the job and could prove to be very effective at times. But it should be remembered that marketing costs and send the burn rates skyrocketing and sometimes to no avail. Marketing spend at the end of the day should be treated as discretionary versus necessary.

Hence, it is always wise to focus on the content strategy and becoming the best and efficient in your space. Great content positions you as the expert in the field, it’s free, and its impact is long term if you stick with it consistently and keep the bar high.

4. Focusing on profit- The focus should be on increasing the revenue. And by increasing revenue means by raising profit and planning to operate on profitable tracks rather than garnering millions and failing to control costs and spend from going out of hand. The reality is different for every startup, which needs proper and detailed evaluation, spending accordingly and also being flexible. Burn rates will always vary depending on the stage the startup is in its lifecycle—product, user, or revenue.

5. Equity – One of the most important reasons so many individuals are leaving their lucrative jobs to come up with their innovation and experience to build a new startup is because they would have a stake in the venture. Employees are one of its greatest assets and there are many ways to retain them in your company. One such successful attempt would be giving them a stake. It surely helps in motivating and retaining them, more so in situations where paying steep salaries is not possible.

It is difficult to keep burn rates low because there will always be unaccounted incidents. It doesn’t mean entrepreneurs would let the ball drop. Being an entrepreneur keeps one on the toes always— keeping an eye on cash flows in the bank and their longevity, raising funds, spending time on customer acquisition- and all this without neglecting employees.