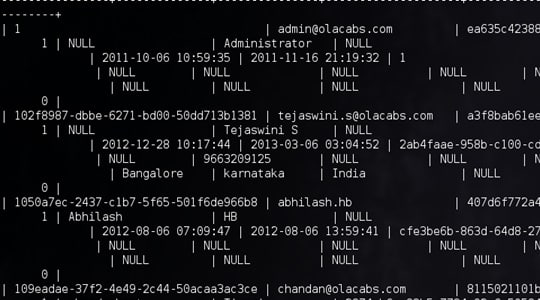 A hacker group called “Team Unknown” has announced that they have hacked the database of Ola Cabs and have access to important information regarding credit card details, transaction history and unused voucher codes. The announcement on Reddit said “Once we got to the database it was like winning a lottery. It had all the user details along with credit card transaction history and unused vouchers. The voucher codes are not even out yet..”

Though they have assured everyone that they will not be using any credit card details for illegal purposes, this security breach has caused a lot of anxiety to form in the minds of the public.

Below are the screen shots that team has made public on Reddit. The first one shows email Ids and credit card details of Ola Cabs customers. The second shows a list that has all the major tables inside the Ola Cabs database such as user preferences, details and transaction history.

Team Unknown has claimed that they have contacted Ola Management about this hack, but as of now, they have received no notifications from them. On a final note, they said “I am sure OLA might be having a security team of their own. Not that good it seems 😉 “

Shubham Paramhans, a tech enthusiast had earlier hacked Ola Wallet in May, and collected huge amounts as free recharge. In his blog, he had said, “Breaching Ola was one of the easiest kind of hacks possible, and a part of me is disagreeing with the part that describes it as a hack.”

After a month of his ‘exploits’, the security team from Ola corrected the issue, and also thanked him for bringing out the flaws.
While we are at the mercy of the hackers who have decided not to use vital information for illegal practices, how long will it be till something goes wrong?