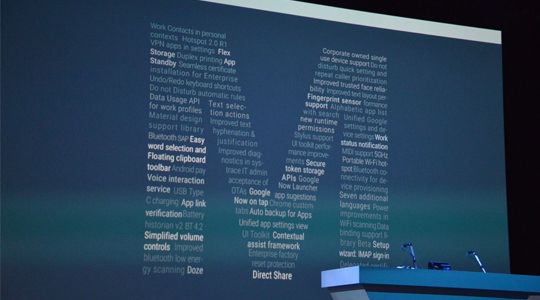 Google announced its latest version of Android – the unnamed Android M at the annual developer conference Google I/O. The pre-release version of the upcoming mobile operating system has been launched for developers while the full version will be released later this year.

While Lollipop was aimed at redesigning and polishing the Android experience, Android M will further work on the same design to make the usage even better. Google outlined 6 major areas that will be improved in the next iteration.

Permissions
Android has not had the best permission system since its inception. The glaring issue is the fact that applications ask for permissions during the time of installation. Android M will have the permissions section broken down into a much more user-specific model where he or she can select different features of the phone to be used for an app.

Web views
Android M will improve on the behaviour of web views within other applications. Using Chrome’s Custom Tabs feature, the user can have Chrome run atop their app whenever a link is clicked. This will include transferring of autofill data, passwords and cache when links are opened in a specific application.

Handling web links
There are numerous web services that have native apps that ask whether a link needs to opened using a web browser or an app that the phone has. Android M will address this area and detect if certain types of links are made to be opened with their app by verifying with the web server that those links point to.

Android Pay
Android Pay is available on other versions of the OS but Android M will have a new API to standardize fingerprint sensors on Android devices. This will not only let users authorize payments using fingerprints but also for verifications.

Power usage
Android devices have forever been criticized for their power usage . Android M will come with the Doze feature that will reduce power usage when the phone has been left idle. Based on data from motion sensors, Doze will detect if the phone has been left idle on a table or a dock for a long time and reduce background activity. Google also plans to implement USB Type C as a charging option for future devices.