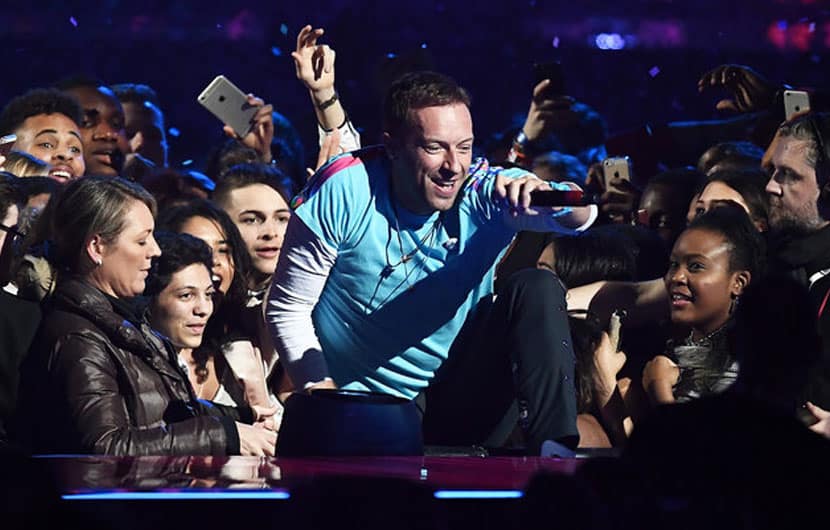 The Chainsmokers and Coldplay made their live debut of “Something Just Like This” at the 2017 Brit Awards just hours after the hitmaking DJs (of The Chainsmokers) unveiled their latest collaboration. The performance began with a silhouette of Coldplay frontman, Chris Martin, on huge red curtain alongside the duo of The Chainsmokers but once the curtain dropped Martin was seen running around on stage.

At one point, Martin even jumped into the crowd, which obviously pumped the performance up even more. The other Coldplay band members then joined Martin on stage and it all accumulated to a much livelier performance at the end than when it began.

While Chris Martin had taken stage earlier in the night to pay tribute to the late George Michael, the collaborated performance for “Something Just Like This” was kept very hush-hush up until the moment of the performance itself. Watch the performance here:

In case you missed Coldplay & The Chainsmokers debut of #SomethingJustLikeThis you can download it on our forums! | https://t.co/0NZnz0n3Sj pic.twitter.com/LOJag5KXwy

What’s more, since its release just a few days ago, the song has already reached the No.1 spot on the US iTunes Chart

#SomethingJustLikeThis has officially made it to the #1 spot on the U.S. iTunes chart!!! pic.twitter.com/bxzKcgE3NU

Continue Reading
You may also like...
Related Topics:2017 Brit Awards, chris martin, Coldplay, Featured, Something Just Like This, The Chainsmokers