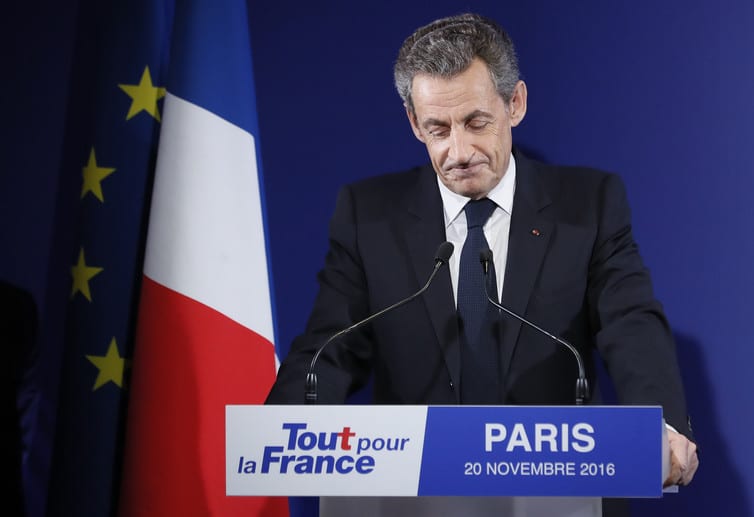 In a surprise twist, Nicolas Sarkozy has been kicked out of the race to stand in France’s 2017 presidential elections, failing even to make it to the second round of his party’s primary.

No-one saw this embarrassment coming, but at least the pollsters got one thing right – they predicted that a high turnout would do Sarkozy no favours. And indeed, he crashed out, a distant third, with just 20% of the vote.

More surprising still, and perhaps a little shocking, was the victory of Sarkozy’s sometime prime minister François Fillon, who now becomes the firm favourite ahead of a second round of voting to decide the eventual Republican candidate.

Fillon took 44% of the vote – a significant lead over the pre-race favourite, Alain Juppé, mayor of Bordeaux and another former prime minister.

The two will now go head-to-head in a vote on November 28, but it’s very difficult to see Juppé bridging the gap, especially as Sarkozy has given Fillon his support.

This is the first time that the French right has used a primary to select its candidate for the presidential election, although they were the first ones to toy with the idea, back in the 1990s. Officially billed as the primary of the right and centre, the centre parties all politely declined the invitation, on the grounds that the terms and conditions bound all the participants to supporting the eventual winner. No-one in the centre of French politics wanted to support Sarkozy if he did win. It’s not yet clear how they feel about Fillon’s runaway lead.

The primary runs, like many French elections, over two rounds on consecutive Sundays. As a process, it has been a more-or-less unqualified success. More than 4m people turned out to pay their two euros (to cover the costs of the elections), sign a vague pledge, and vote. For comparison, only 2.66m voted in the first round of the Socialist primary in October 2011.

Admittedly, there were problems handling the queues at some polling stations, especially in western Paris, just after morning mass. And running out of envelopes for voting slips in some stations suggests that the organising committee were caught short by the popularity of the process. (In French elections, voters are given individual slips of paper with each candidate’s name on them. They take these into the booth and then put the slip with their preferred candidate’s name on it into the envelope, which is then placed in the ballot box.)

Fillon’s extraordinary success was built around his performance across a series of three television debates between the seven candidates over the past month.

At the end of October, a Le Monde poll put Juppé at 41%, Sarkozy at 30% and Fillon on just 12%. By the Thursday before voting, on the eve of the third debate, the gap had narrowed, though Juppé was still ahead and Fillon was gaining.

Even in the most extreme scenario, Juppé was projected to secure 29% to Fillon’s 28%, with Sarkozy on 25%.

By the end of the third debate, however, Fillon was looking stronger. According to an Elabe poll, he had been the most convincing of the candidates on the night. Perhaps this is where the polls came into their own: right-wing voters may or may not have watched the debate, but they certainly picked up on the pro-Fillon vibe that was gathering momentum

So, why did right-wing voters plump for Fillon? He was prime minister throughout the Sarkozy presidency so if he appeals, why wouldn’t voters just plump for his boss?

Therein, however, lies some of Fillon’s attraction. Throughout his tenure, he remained more popular than Sarkozy and, the myth runs, reined in the worst excesses of Sarkozysme. He has experience. He also has the benefit of considerable goodwill among right-wing Catholic voters.

Juppé’s biggest problem has always been appearing too close to the centre ground and many electors will have been put off as a result. They will have been looking for the candidate of the right first, before sending that person out to seek support from the centre and left in a run-off against the Front National’s Marine Le Pen, if it were to come to that.

But Fillon is not just a marginally sterner version of Juppé. His programme includes swingeing cuts to France’s public sector. He wants to cut 500,000 state jobs (unrealistic according to Juppé) and use referendums for key reforms (populism, did you say?). He also wants a “government” for the eurozone, though what he means by this is not very clear.

Of course, it’s not an absolute certainty that Fillon will be confirmed as the right-wing candidate in the second round, but it is difficult to see any other outcome. It will be interesting to see how many people turn out to vote then. In 2011, the numbers for the second round of the left-wing primary actually rose. A good performance by Juppé might smoothe the more austere edges of Fillon’s programme, but there are no guarantees. It’s not a great result for Marine Le Pen, but it’s not the worst result either.

Cancel reply
Jaipur Literature Festival 2017: speakers on caste issues to Brexit and more
5 things you should know about setting up an Airtel Bank account