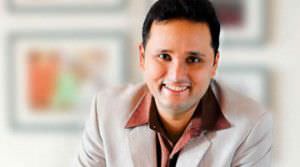 Everyone has a story to tell. But the really remarkable ones are found in the most unlikely places. What matters is a storyteller’s urge to make him heard irrespective of the surroundings. Such is the story of Amish Tripathi, bestselling author of the Shiva Trilogy, the fastest selling book series in the history of Indian publishing. While Amish’s stories were praised by countless readers, his own personal journey from a seasoned banker to a successful author is nothing less than extraordinary.

The Shiva Trilogy consisting of Immortals of Meluha, The Secret of the Nagas and The Oath of the Vayuputras depicts a fictional retelling of Shiva’s life and adventures. The first book was launched in 2010 and got listed in the bestseller chart in just a week of its launch. The subsequent books were also met by both commercial and critical acclaim. As of today, The Shiva Trilogy has generated over 2.2 million copies and Rs.60 crore in sales.

“It started as a pure philosophy thesis 10 years ago. The idea of this adventure is to convey the philosophy,” Amish comments.

Amish’s journey into creativity started with his stint as a singer when he was in IIM Kolkata. Once he began working in the banking sector, he ventured into writing – an attempt to delve into philosophy. Over the next 14 years, he continued his writing journey by authoring the first two books in the Shiva Trilogy – Immortals of Meluha and The Secret of the Nagas. It was only after the success of these two books that led Amish to resign and explore writing full-time. His success was not overnight though. Immortals of Meluha was rejected by numerous publications but once it got noticed, it has been a smooth sailing since.

Amish’s long journey has now earned him a spot in Forbes’ list of top 100 Indian celebrities three years in a row (2012, 2013 and 2014). He was also chosen as an Eisenhower Fellow, a prestigious programme for exemplary leaders from around the world and was awarded the Society Young Achievers Award for Literature.

Striking the right chord between work and personal life was not easy for Amish. During his days in banking, he used to write during weekends when he commuted. His top priorities during that period were his family, job and the passion to write. Today, when he looks back, he claims that his banking job was not an unhappy one since it paid him well and made him realize his responsibilities. But the life which he leads now is much more fulfilling.

His views on spirituality are quite profound. “I don’t think spirituality can be forced on anyone it’s your choice. Some people are materialistic, some are spiritual. Some people strive for balance between the two. I have turned spiritual gradually when I started writing books. I am a very devoted Shiva worshiper.”

Family plays an important role in Amish’s life as well. He devotes his evenings to his family and considers them to be an essential part of his writing journey. He credits his parents, siblings, wife, kids, in-laws along with others as integral parts in his life that have supported and motivated him throughout to work better. An average day in Amish’s life also shows his dedication towards following a routine religiously. “I workout everyday and every alternate day my trainer comes home. Large part of your discipline also depends on your food habits. One has to be disciplined in their lifestyle.” he adds.

When asked about midlife crisis, Amish casually denies the notion and talks about how he has a new and improved life. He had always thought of a future as a banker but his life has transformed in the last two years. “I don’t know if it’s the age 40 or not, but life has taken a completely new turn for me in the last two years. My wife always says that she has two husbands with the same marriage.” he laughs. He considers himself to be a new person now who is much more emotional. He believes his age is just a sign of him growing old physically, but not mentally.

On a lighter note, Amish enjoys the little things in life to the fullest. He loves his music that spans from Indie music to classical and pop. He claims his life to be totally divine and the recent turn of events have turned him into a much happier and calmer person. Passion surely brings the best out of a person.

For Amish, the Shiva Trilogy was just the beginning. He has already written his next book that revolves around a story about Lord Ram. While he won’t say no to developing concepts for a film, for now, he wants to focus on writing books only and not indulge in scriptwriting. When asked about his views on fellow writers turning scriptwriters, he says, “creatively writing a book is more satisfactory because the author is the one who makes all the decisions in the book but in a movie script it has to be the director.”

Amish credits his inspiration to Shiva whom he religiously follows. He considers his writings to be a parallel universe where he can enter when he writes. He also recalls a line that he followed throughout his career – “Life is short, the road is long….HURRY”.

Amish departs saying: “Choose your heart to decide your destination but one should use their mind or brain to plot the way to that destination.”

Continue Reading
You may also like...
Related Topics:Amish Tripathi, amish tripathi shiva meluha, Immortals of meluha, oath of the vayuputras, scion of ikshvaku, secret of the nagas, Shiva Trilogy