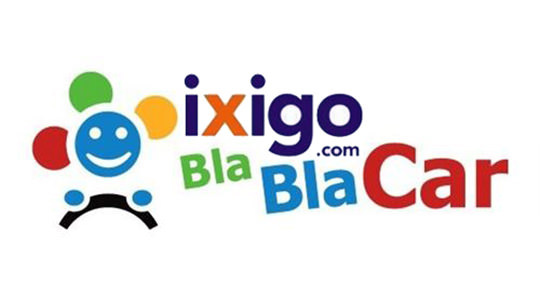 BlaBlaCar, the largest city-to-city ridesharing app in the world has collaborated with travel marketplace Ixigo to offer inter-city ridesharing to Indian tourists. As a result, Ixigo users will now be provided with information about available car ridesharing options from BlaBlaCar whenever they search for travel options between cities.

“India’s response to BlaBlaCar has been great. In our first 100 days, over 100,000 seats have been offered on BlaBlaCar across 700 unique cities and towns. ixigo’s market leadership on travel search & planning apps made it a natural partner for us. This partnership gives us a potential reach of over 60 million travellers across India. BlaBlaCar provides a strong alternative to people for their city-to-city travel needs especially as public transport infrastructure is insufficient” said Raghav Gupta, India Country Manager, BlaBlaCar.

“We are delighted to be bringing Europe’s largest ride-sharing platform closer to Indian travellers. With this partnership we are able to offer ixigoers more choice and convenience over overcrowded buses and hard to get train seats” said Aloke Bajpai, co-founder and CEO, Ixigo.

BlaBlaCar aims at connecting people who are searching for inter-city travel options with car-owners travelling towards the same direction or destination. These travellers can share the cost of their journey. Founded in 2004 by Frenchman Frederic Mazzella whose vision was to create a transport system that let car-owners to offer empty space in their cars to travellers and share fuel costs, BlaBlaCar has spread its network across France, the United Kingdom, Italy, Spain, Portugal, Poland, Belgium, Netherlands, Luxembourg, Germany, Russia, Ukraine, Turkey, Hungary, Romania, Serbia, Croatia and India. Last year, it won the award for Best Sharing Economy start-up at the Europas 2014. Recently, the company acquired its biggest international competitor Carpooling.com that will let the growing transport start-up to further dominate European countries.