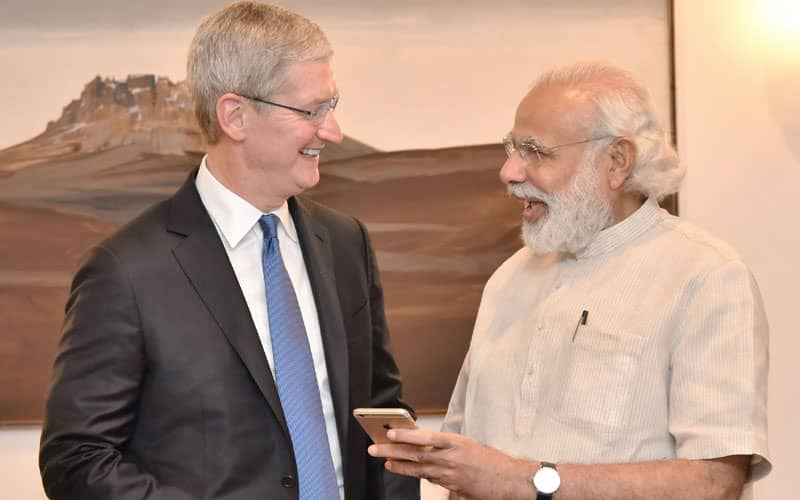 Tim Cook’s most high-profile engagement of his maiden visit to India took place on Saturday, where the Apple Inc. CEO met Indian Prime Minister. The discussion that ensued included issues relating to cyber security, data encryption, the possibility of manufacturing in the country and tapping India’s young talent. Cook has left India and visited an Apple store in Dubai, according to pictures posted on his Twitter feed.

In a statement released by the Indian government, “Cook shared Apple Inc.’s future plans for India. He spoke of the possibilities of manufacturing and retailing in India.”

According to reports, an Indian telecommunications ministry official had said on May 3 that the country had rejected Apple’s request to import and sell refurbished iPhones to Asia’s third-largest economy. Prime Minister Modi wants Apple Inc. to manufacture iPhones in India instead.

Modi, in turn, explained his ‘Digital India’ initiative and sought support from the company in furthering the objectives of the program, which aims to connect hundreds of millions of villagers to the Internet.

Cook’s India visit was scheduled amidst declining sales of iPhones globally. India is a market where most phones are bought outright and aren’t subsidised by carriers through calling plans. The challenge for Apple is that its products are beyond reach for many Indians with most people living on less than $3.10 a day, according to World Bank data.

With China’s market becoming more saturated, people across the globe are less frequently upgrading their smartphones. Brands like Apple, Samsung Electronics Co., and other vendors are keen to sell to India’s middle class, which is projected to quadruple to 200 million by 2020.

Before ending his India trip, Cook unveiled an updated version of the PM’s mobile app that includes a new volunteering network. He tweeted, “I urge you to have a look at the new feature ‘My Network’ that empowers you to contribute on lively and enriching forums, where you can share your ideas and deliberate with others. You will also enjoy the daily tasks on the App.”

“Thank you @tim_cook!” said a message posted on Modi’s verified Twitter account after the meeting, showing the two men standing together, looking at Modi’s iPhone. “Your views & efforts are always enriching.”

Cook, in turn, thanked Modi from his own official Twitter account and added that he is “Already looking forward to next visit to India.”