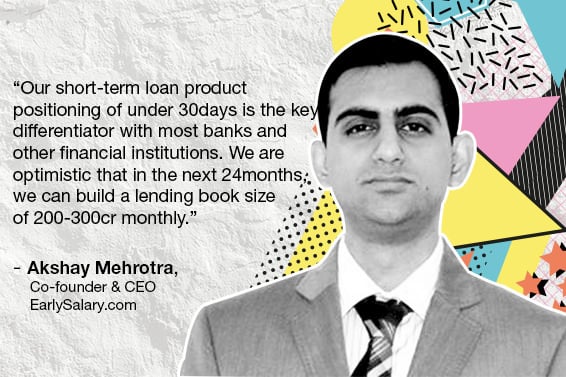 The only solutions that are ever worth anything are the solutions that people find themselves. Akshay Mehrotra, co-founder, and CEO of EarlySalary.com has followed this letter and spirit.

It was in the October of 2015 when Akshay along with two of his close friends Ashish Goyal and Jay Jain decided to take a plunge with a broad based idea of a short-term lending platform.

“One usually runs out of money on month ends and the last 10days of every month get difficult. EarlySalary.com offers small bridge loans which are given to people within minutes to help them tide over the cash crunch on month ends,” says Akshay.

EarlySalary.com, which is India’s first fully digitalized mobile app to get a quick loan for a short duration between 7 days and 30days, got started to solve a very simple problem.

In Feb 2016, EarlySalary was launched on Google App Store and iPhone App for iOS users. With two months EarlySalary.com already has 60000 app downloads already. It is offering loans in Pune, Bangalore& Chennai and soon will open operations in 4 more cities in the next quarter.


“It operates similarly to a cash advance or withdraws from a credit card or salary advance. After downloading the App, the user has to share a few details including Facebook and LinkedIn login details, PAN card number and bank account details. Within 10minutes EarlySalary.com decides to lend him/her the money and initiates procedure to transfer money to consumer’s account,” explains Akshay.

During the first time, however, when a consumer applies, it would take an hour more to get money transferred. But since then it will take only a couple of minutes to transfer the same. Loan taken by users need to be repaid when their salary gets credited to them.

There are obvious risks in the venture of the unsecured loan by the company’s proprietary underwriting tool ‘Social Worth Score’ is powered by a regressive machine-learned algorithm which combines applicant’s credit history with their social data and derives a score that helps in decision making.

Akshay says, “The decision generated is by looking at user profile data combining social media data with Credit Bureau data. Till now there have been no defaults. We are a registered NBFC with RBI and we lend money to the applicants.”

With internet penetration, technology in the financial space is catching up in India. The Fintech startups have been successfully addressing the under-served micro- and small-business segments for their financial needs, which are not met by banks.

Fintech, though a complex ecosystem, has been rapidly evolving.

“The overall potential for Fintech in India is very promising. It also largely depends on- governments, regulators, financial institutions, entrepreneurs, lenders, borrowers, market participants, investors and lending platforms to play a responsible role in being supportive in the development of this powerful business model.”

“This creates a huge potential for EarlySalary.com for tapping the remaining youth population of India looking for easy loans. many players are disrupting the traditional Banking space by offering both solving consumer pain points like payments, lending, financial inclusion or solving business issues in the Banking space including payment aggregation or risk analytics spaces.”

Though the country is still inclined towards existing institutions like banks for securing loans, Akshay thinks, the scenario is changing and the disrupting ideas are already having an age.


“EarlySalary is a short term loan product positioning of under 30days is the key differentiator while most banks and other financial institutions offer longer term tenure. We focus on 21-28 years old while traditional institutions are wary of lending to young working populations. And we use multiple decision systems including Social Media score carding part from credit bureau scores.”

He continued, “EarlySalary allows it users to have a lifestyle in its early career ages, its similarity to salary/cash advances which come companies’ offer to their employees but it’s not something offers from Financial Institutions. We are a digitised platform and end to end Financial Institutions, and not just P2P platform. We acquire customers, we decide, we take the risk on our books, and we recover from customers”

Currently, EarlySalary is operational in Pune, Bangalore, and Chennai market.

“We are following the IT corridor and will soon finalise the next city launch. Our revenue model is primary interest on deployed capital and digital systems help us reduce the cost of operations while in shorter tenure helps us revolve capital better. Currently, we are equity funded but as we grow our book Debt will be instrumental in our growth.

The company has already received Seed funding from Ashok Agarwal of Transcorp Group of USD 1.5 million at the initial stage. EarlySalary has received 60000+ App downloads and loan requests in the last three months.

“We are optimistic that in the next 24months’ time, we can build a lending book size of 200-300cr monthly, which will require funding in future,” added Akshay.