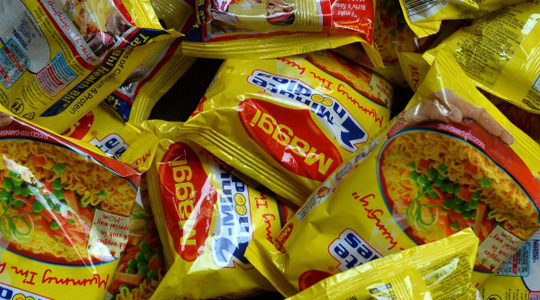 After many rounds of intense controversy, Nestle India is finally exiting the stage and withdrawing its flagship product Maggi Noodles from shelves. However, the company has promised that it will reiterate the image of Maggi and will be back soon. The popular snack has been under scrutiny throughout the country due to tests revealing the high content of lead and MSG in it.

Nestle said in a statement, “The trust of our consumers and the safety of our products is our first priority. Unfortunately, recent developments and unfounded concerns about the product have led to an environment of confusion for the consumer, to such an extent that we have decided to withdraw the product off the shelves, despite the product being safe.”

Nestle further added that they promise to bring back Maggi Noodles back in the market as soon as the issue is resolved. The company emphasised on the fact that the packaged snack has been a trusted product in India for more than 30 years.

Over the past 5 sessions of shares, Nestle has fallen 15 per cent due to the Maggi controversy which accounts for 1/5th of the company’s revenues. Delhi was the first state to ban the product for 15 days. It was followed by J&K, Tamil Nadu, Uttarakhand and Gujarat who also announced temporary bans.

In states like Kerala and Tamil Nadu, Nestle’s other products are being tested as well. Furthermore, rumours of a larva being found in a packet of Nestle’s NAN PRO 3 milk powder in Coimbatore are also spreading throughout the country. These reports can further damage Nestle’s reputation.