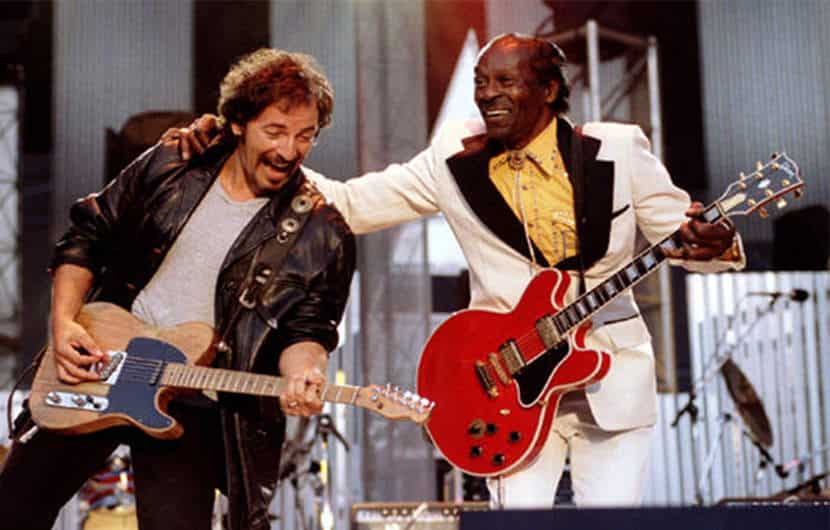 Bruce Springstein and Chuck Berry performing Johnny B. Good at the Rock & Roll Hall of Fame in 1995. Source: Stringer/Reuters

The death of Chuck Berry over the weekend at the age of 90 has led to an outpouring of respect for a man widely recognised as one of the most important founding figures of rock and roll. His place in the music canon is undoubtedly deserved and is likely to be enduring.

Berry’s musical legacy sits alongside another aspect of his life which is all too familiar in the music industry – a history of mistreatment of women. Berry spent time in prison in the early 1960s after being convicted of transporting a 14-year-old girl across state lines for the purpose of prostitution.

While there is some question about whether this was an instance of an overly broad law being applied in a racist way, less ambiguous is the estimated US$1.2 million settlement he paid to 59 women in the early 1990s after being accused of installing a hidden camera in the ladies bathroom of his restaurant in Missouri.

Obituaries to Berry released over the last few days vary greatly – some omit or minimise this material, while others include frank accounts of these events. The New York Times has given a thorough account of his darker side, as well as his accomplishments:

In 1987 he was arrested by the police on assault charges at the Gramercy Park Hotel in New York, where a woman said he had beaten her up. Eventually Mr. Berry pleaded guilty to harassment, and was fined $250.

It is encouraging to see any such discussion in an industry where iconic musicians, particularly after death, have their abuse of women ignored or excused, overshadowed by the myths that grow up around them.


Examples of this abound. The degradation of groupies by touring bands is often presented as the “stuff of legends” in rock music histories. A particularly lurid example involves members of Led Zeppelin, a teenage girl and a shark; although music journalist Lisa Robinson has clarified the taxonomy:

‘It wasn’t a shark,’ Richard Cole told me years later. ‘It was a red snapper’.

Sleeping with underage girls (aka statutory rape) is not uncommon among musicians, and was actively celebrated in the 1970s. The abuse of girls was not confined to this period, however, as the many settlements that R Kelly has made to women accusing him of predatory behaviour suggests.

Artists such as John Lennon, Ozzy Osbourne and Tommy Lee have admitted to or been convicted of domestic violence. Lennon was quoted in a 1980 interview with Playboy talking about his history of hitting women:

That is why I am always on about peace, you see. It is the most violent people who go for love and peace.

While some musicians, such as Chris Brown and Ike Turner, have been held to account for violence they have committed against women, there is a clear racial element to this. Similar acts are minimised in collective memory when white rock gods are involved.

Even in the most horrible of cases, our culture strives to protect the reputation of men who are seen as creative geniuses. A 2016 mini-series, Soundbreaking, gave extended coverage to the career of Phil Spector, praising his innovation and skill in the studio, while completely omitting his extensive history of violence (not only towards women) and the fact that he actually murdered actress Lana Clarkson in 2003. (This type of treatment is not only found in music; Roman Polanski is a similar case in point in the film world).

Our failure to centre these stories in discussions of music has two sources. One is the the general social tendency to frame violence against women as not important. The other is more specific: we often connect to music because we identify with something about it, and therefore with the people who create it. To acknowledge their misdeeds can detract from our enjoyment of music.

Should we listen to the work of people who have done bad things? (Or, in other instances, read their books, or watch their movies?)

We suggest that separating out the artist and the art is possible, and that an audience troubled by Chuck Berry’s misdeeds can still enjoy his music and acknowledge his influence.

Not separating art and artist leads either to excusing bad behaviour, or rejecting art that may contain much of value – and may also contain the input of many people, not all of whom deserve to be censured.

At the same time, however, there is a moral imperative to include the darker side of Berry’s like in historical accounts, obituaries, and even discussion of his music. To exclude it sends the message that abuse of girls and women is unimportant, and that it can be outweighed and perhaps even justified by claims of musical genius.


As the founding figures of rock and roll die, it is time to foreground their wrongdoings as well as their accomplishments. We need to challenge the normalisation of abuse in the music industry, and make this ugly side of the music we love more visible. By doing so, the music industry can be made more inclusive in the future.

2021: The best of Malayalam cinema so far