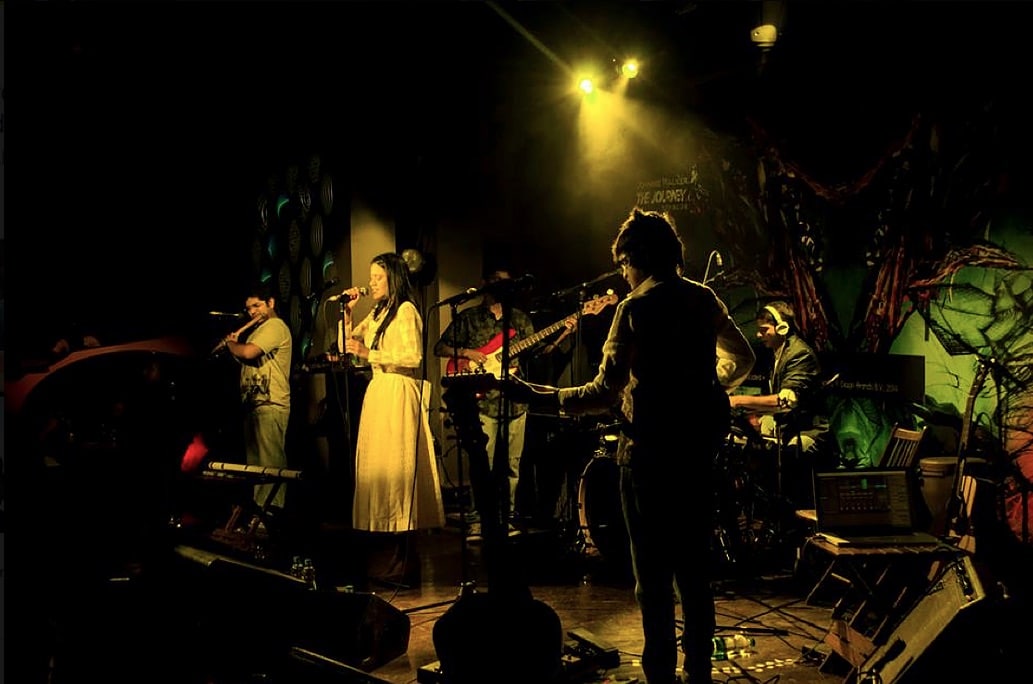 Maati Baani – Language of the Earth is known for its fresh music that goes experimenting across genres. Ask Nirali and Kartik why Maati Baani and they will tell you, it is about meeting new people and making memories which get translated into songs from world sounds.

Chances are you remember the song “Tore Matware Naina” from the movie David. It originated one sultry summer day of 2012, the beach of Azheekkal in Kerala with auteur/compositeur Dominique Sylvain aka Joy Shanti mouthing these words aloud to the salty winds, “L’mour est ma foi (Love is my faith)”. If you watch the outcome even today, the atmosphere is alive with camaraderie, and as Nirali walks effortlessly on the tightrope of the Hindustani Classical sur structure, dropping murkis as presents, Joy Shanti with her free-as-the-wind voice skips tune with skilful abandon. Add to those –  samples from Naushadbhai the flute seller/ flautist who was passing by outside Maati Baani’s studio along with Bashirbhai, a Pinjara/ card reader by profession. Nirali and Kartik, husband and wife, and the two wheels of avant-garde folk fusion band Maati Baani have not let themselves fall into a routine when it comes to how they make music.

Maati Baani decided early on not to be bound by genre when they collaborated with musicians from all over the world. To leave behind a prior knowledge of a particular genre’s sensibilities remains signature in their music and this ends up making each of their tracks very different from one another. “We like to present different traditions of world music in a different perspective, making sure our songs don’t sound like a mash-up of different genres but rather a straightforward and simple song with a strong melody”.

Both Nirali and Kartik see Maati Baani’s music intrinsic with journeys, both of the literal and metaphorical kind, hopping skipping genres, people, and cultural habits right into a sea where everything else is second to a certain musical intuitiveness, a common thread between seemingly different yet opposite cultures. “We have (found a common thread in world music) in ways more than one. Whenever we go to cities or villages to record artists whom we have never met before, we don’t know what and how the music would happen. But, when we start to jam, all the unfamiliarity dissolves. Each musician contributes in his/her unique style to the song. The fact that music makes friends out of strangers amazes us, and it drives us to find how this spirit is carried in the music!” Kartik’s favourite story about this is how he met Kutchhi musicians who eavesdropped regularly on Pakistani radio to learn Sindhi songs, and he sees this validating the hypothesis that music speaks beyond social and cultural boundaries of difference.

They remain very open to collaborations from people of different communities, and the song-making journey may differ every time. Nirali says, “At times, it is the artist who decides the course of the song. Like for “Tore Matware Naina” we first recorded Joy Shanti’s vocals. Later, we composed a Hindustani melody and added such elements that complemented her vocals.  At other times, it is the song that decides which artist/ genre would fit in. Like for Boondan, we felt a folk wind instrument would bring in a certain freshness to the song and so, we recorded Noor Mohammed on Jodia Pawa.”

Nirali and Kartik come from different musical backgrounds, and while Nirali has been learning Hindustani Classical since her childhood, Kartik as a composer has had first-hand experience with several genres of music and is passionate about incorporating different sounds into his compositions. The internet has always been a big part of realising these collaborations. Nirali and Kartik don’t even restrict themselves to established artists while trying to find sounds true to the culture. Kartik says, “World music has always charmed me, and I wanted to combine Hindustani music with various styles of music, both, local and global! Our upcoming song features 11 musicians from Europe, UK, New Zealand and India. It’s a very ambitious project. Also at the same time, we like Hindustani classical to carry the cart like a protagonist. Most of our songs are based on classical roots. We are on a mission to make people cherish Hindustani classical.”


The audience has always reacted very favourably to their collaborations, and this has worked out in their favour. Kartik tells us about their ensemble performance as a team of eleven at Pune for the Weekender, “We were performing first on that day, and it was a hot day. As we expected, the crowd was all dispersed and still warming up for the day. When we started to perform, the crowd was taken in by surprise as we introduced the most unusual artists on stage for every song. Soon, everyone in the audience was cheering, singing along and dancing to our songs! It was sheer madness!”

While being married to each other has helped them further on with the experimenting, both Nirali and Kartik are in sync with this for the future as well. Both of them see it as important when it comes to celebrating and furthering a cultural legacy and think music forms a crucial role in community identity. “Art and culture are to society what intellect is to mind. Music is the most celebrated art form which symbolises our urge to rise above the banal existence and celebrate the joy of existence. A mother’s lullaby, temple bells, morning chants are some of the ambient sounds of music that enrich and fulfill our beings in our daily lives…” says Nirali, to which Kartik adds, “As Indians, we are so fortunate to have inherited the legacy of traditional music, both in classical as well as folk. It is up to us as a society to treasure and value this legacy, so that it remains an unending source of joy and inspiration for generations to come.”

Nirali and Kartik ultimately, while being the face of the band, believe that it is the relationships they form, the binding links between music from different polarised factions of the world that make their music come alive and decide its course, an oral narrative in its own. And if you listen to their songs, you could not agree more.

Cancel reply
Coke Studio: The After Story
Belle of the Indie Ball

2021: The best of Malayalam cinema so far