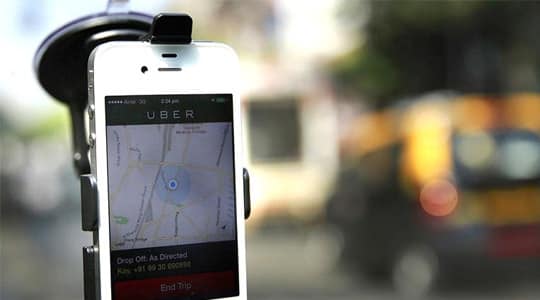 Domestic company Ola Cabs and US-based Uber are booming, fuelled by a rising number of professionals wanting an easy-to-book, clean and air-conditioned cab in India’s rapidly growing and congested cities.

“We have barely scratched the surface. We need to be in every corner of India and it is a huge country, so the potential is huge,” Ola spokesman Anand Subramanian told AFP.

But it hasn’t been a completely smooth ride, with the government rejecting Uber and Ola’s applications to operate in New Delhi, even impounding their cars, and both firms facing angry protests from traditional taxi drivers.

Ola Cabs has soared from fledgling Internet startup to the leader of India’s smartphone taxi-hiring industry in just five years and is now worth an estimated $2 billion.

It recently bought up domestic competitor TaxiForSure for a reported $200 million and is also outperforming web and mobile app-based rival Meru Cabs in a crowded marketplace.

But in 2010, two young entrepreneurs in Mumbai — Bhavish Aggarwal and Ankit Bhati — decided that India’s tech-savvy and wealthy middle-classes wanted the convenience of a comfortable ride with just a couple of clicks of their smartphones.

They founded Ola and started operating with only a handful of vehicles before increasing the number of cars on its network to 10,000, across ten cities, by last year.

An aggressive recruitment drive over the past 12 months has resulted in its operations rising more than tenfold and Ola now operates 150,000 vehicles in 100 cities stretching the length and breadth of India.

Ola notched 200,000 rides a day in January and predicts it will record over a million a day this month. They have also started to offer auto-rickshaws for hire and are to start delivering groceries too.

It doesn’t own the majority of the cars itself but helps drivers acquire loans which are then repaid in small sums.

Some of those drivers joined hundreds of others working for Ola and Uber at a demonstration in New Delhi on Monday, saying the city government’s crackdown on the industry had forced them off the roads.

Drivers said police had been impounding their cars, forcing them to pay fines and go to court to get them back, ruining their livelihoods after local authorities started to put pressure on the companies following their defiance of a state-wide ban.
The companies were banned in the capital in December after an Uber driver was accused of raping a woman passenger in a case that sparked uproar.

But they resumed operations in January even though the government rejected their applications for a licence to operate.

“We are doing an honest job, there is 100 percent transparency here, why are we being treated like criminals?” said Petrick William, 35, whose car was impounded.

Drivers told of borrowing heavily to buy their cars so that they could drive for Uber and Ola, allowing them to build their own business and earn more money than working for regular Indian taxi companies.

“This is honest money that we are making. And for the first time in our lives, we can send our children to good schools, pay our rent on time, something we have never had before,” William said. “Why are they taking that away from us?”

Delhi’s Ola and TaxiForSure drivers were given an reprieve last week when the High Court overturned the government’s ban. Uber has now filed a similar petition in the court in the hope of winning a similar ruling.

Subramanian, Ola’s spokesman, said his company planned to hire 50,000 women drivers over the next three years to ease safety fears among female passengers.

“It would also create work for those women who otherwise do not get those opportunities,” he added.

Ola already uses an investigative agency to look into candidates’ background to ensure their suitability while Uber has also tightened up its security checks following the alleged rape.

While Subramanian is bullish about Ola’s future, some analysts are sceptical about its long-term viability.

“From a customer convenience angle, startups which deliver services at your doorstep on demand are great, but from an investor angle they do not appear to be that impressive since they do not give returns,” Paras Adenwala, head of Mumbai-based Capital Portfolio Advisors, told AFP.

“Once interest rates start rising they are going to start facing money problems,” he added

This story was originally published in The Economic Times.