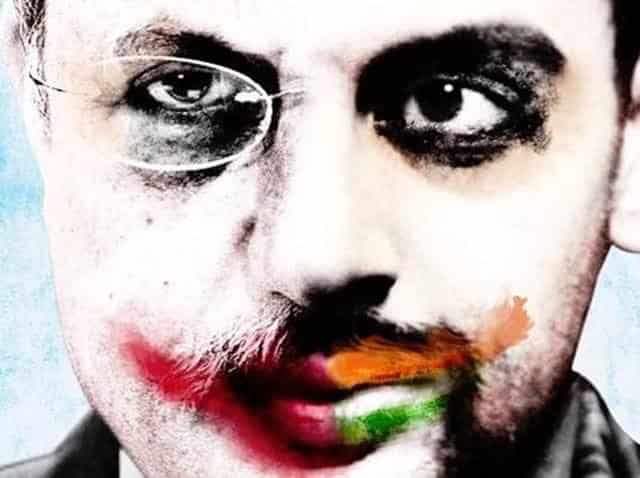 Jadavpur University was again amidst violence and commotion on Friday evening that continued till late hours of Saturday with university students protesting, when a screening of director Vivek Agnihotri’s “Buddha in a Traffic Jam” at Jadavpur University (JU) was interrupted several times before being abandoned after 20 minutes.

The student protesters stated that they oppose the film’s portrayal of nationalism. There have been similar protests against the film at Delhi’s Jawaharlal Nehru University, amid a raging debate over nationalism.

The movie plot concerns Vikram Pandit (Arunoday Singh), who is a happy-go-lucky management student from a business school in India. He becomes an overnight sensation after a successful social media campaign against the radical fundamentalism of moral policing in India. As people around him get unmasked, Vikram struggles to keep track of whom he can trust and who he cannot, and must fight his way out of this jam at the crossroads of ideologies to save himself.


The commotion that started late on Friday afternoon continued till the early hours of Saturday. Jadavpur university authorities has filed a police complaint against four outsiders on Friday— three of them ABVP activists — for allegedly molesting some girl students.

The film was supposed to be screened at Triguna Sen Auditorium on the campus, which is run by JU alumni association, by the AVBP. It was later cancelled owing to the election season in Bengal. The Assistant Registrar of JU too appealed that the screening be stopped as, he said, the organizers did not have permission for it.

Both Agnihotri and actor Anupam Kher, who features in the film, were supposed to be present for the screening.
However, it was screened on the university grounds despite protests by the Left wing students. There were minor clashes between the protesters and organisers as the screening was stopped and then began again several times.

The ABVP students organized the screening like a political rally. They were raising pro-Modi and pro-BJP slogans said a student of the Film Studies department.

As Agnihotri’s car approached the campus, the Left wing students raised slogans such as “ABVP go back”, “RSS go back”, “Down with Fascism”. In the evening, the presence of BJP leaders like Roopa Ganguly outside the campus further exacerbated the situation.


Not getting permission, the students claim, ABVP members started shouting slogans against the students. Another screening, Nakul Singh Sawhney’s Muzaffarngar Baaqi Hai — a documentary based on the 2013 Muzaffarnagar riots, was scheduled on the university grounds. 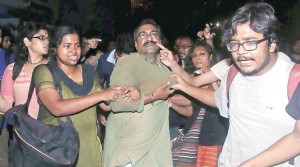 Jadavpur university authorities has filed a police complaint against four outsiders on Friday for molesting girls.

It was disrupted by the ABVP members. “They came to our screening and said that if they can’t screen their film, we also can’t do the same,” said a student.

The scuffle between JU students and ABVP faction is not something sudden. They had earlier come face to face in February when RSS pracharak Dilip Ghosh vowed ‘to drive out all anti-national elements including teachers’ from JU, after ABVP’s failed attempt to enter the campus. It was when JU students had raised slogans demanding ‘azadi’ for Kashmir and Manipur.

Governor Keshari Nath Tripathi, who is also the chancellor of JU, has asked the varsity authorities to submit a report on Friday’s incident.