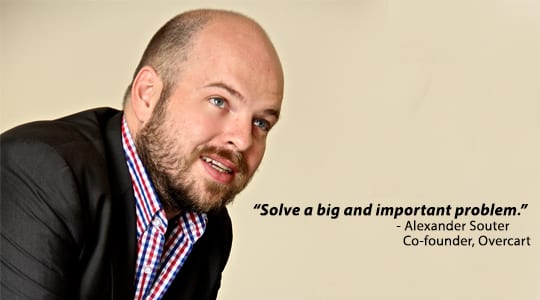 Founded by Alexander Souter and Saptarshi Nath in 2012, Overcart has become a leading player of over-stocked, unboxed, refurbished, and unused products. Following the concept of re-commerce, the company deals with various leading brands and retail giants in liquidating their excess stocks and returned goods.

Since its inception in 2012, Overcart has received three rounds of funding including a GSF Accelerator where the company was incubated. The company has also raised funding from K. Ganesh’s Growth Story, Rajesh Sawhney (Founder of GSF), Amit Ranjan (Co-founder of Slideshare), Dinesh Aggarwal (CEO of IndiaMart), Aloke Bajpai (CEO of Ixigo), Vijay Shekhar Sharma of One97/Paytm, as well as Delhi-based Phoenix Fund and Pune-based Snow Leopard Technology Ventures.

In an exclusive interview with My Big Plunge, co-founder Alexander Souter speaks about the concept of re-commerce and how the future of the online retail can add to India’s start-up economy :

MBP: Tell us about the inception of Overcart and how the concept of re-commerce came to be.

Souter: The original concept that me and Saptarshi had going was the unused product market or even the re-used product market. So the original business model was to create a platform where people could come and sell their used electronics. We’d thought of targeting video games and mobile phones and we had an algorithm that could calculate the right price for the consumer. Further to this, the products were sold to other consumers. What we quickly found out that customers weren’t the only people who had unused inventory. There were lot distributers, e-commerce and retail guys who faced this problem too. So we changed our model slightly to accommodate liquidating the unused inventory from these distributors. Hence, the fundamental business plan is to optimize the inventory of players within the retail industry.

MBP : Where do you think e-commerce is heading? What is the profitability that companies can have if they follow this model?

Souter : I think where we are right now in e-commerce – it is just the beginning. We haven’t reached stability. So there’s still a massive amount of growth that can happen further. If you look at internet penetration in India, it is still 10-15% only. Compared to Amazon and Alibaba on global fronts, there’s a massive opportunity that Indian e-commerce has. You will see the 3-4 big ones become the dominant ones on the horizon and then later you will have somewhat smaller companies that focus on niche businesses. Logistic companies will also play an important role in building this industry.

Souter : Recruiting the right talent on a regular basis is a big challenge obviously. Other challenges are developing the logistics and delivering the products to the customers at the right pace so they have a good experience. Plus the technology as well. So we’re working towards building proprietary and intellectual property. Much of the work we’re doing in the backend – it’s quite new to the world. Getting the R&D to match up with the requirements is definitely very challenging.

MBP : For an e-commerce company, how important and difficult it is to find what the Indian consumer is looking for?

Souter : A lot of it is based on the data. One of the big advantages of working online is that you have access to a large amount of data and analytics. That way you can find out what exactly the consumer needs. We’re very diligent in locating our customers. We have a good sense of finding out who our customer is. A lot of our transactions are happening in tier-2 and tier-3 cities and a lot of our customers fall under a certain age bracket. So we’re quite attuned to that.

MBP : How has been the journey in building a start-up in India? Any support from regulatory framework?

Souter : In terms of setting up an entity according to the regulations, it is quite straight-forward in India. So as long as you understand what the framework is, you have the right amount of support from the legal perspective.

MBP : Do you think there’s too much of capital being put into the entire start-up industry in India? Is the Indian economy is ready for that?

Souter : If you look at geographies like the US, there’s a lot more capital that is flowing there into the companies in the Silicon Valley. Moreover, the point is that the challenges that companies in the valley are solving are not relevant compared to the ones present in India. If you look at the kind of companies that are being built up in India, they are all solving very important problems that relate to socio-economical causes and have a day-to-day impact on Indian consumers. The fact that capital is going in – it means that these guys are actually succeeding. So the more the capital comes in, the better it is for the Indian economy. It’s adding value as well as improving the economy.

MBP : As an ex-pat entrepreneur, how has your journey been? What led you to take the plunge?

Souter : I actually didn’t come to India to start a business. That happened once I was already well-embedded into the country. I’d been in India for two years when I took the plunge. By then, I’d a fair understanding of the Indian market. Of course, there were challenges. Not being born and brought up in India meant that I had to learn a lot. Especially in the early days when I had to understand the mindset of the Indian consumer. Having a local co-founder was invaluable for me. So you have someone who has a deep understanding of doing a business in India.

Souter : Solve a big and important problem. I believe that there’s never a problem that can’t be solved. Having a positive outlook helps.

Hey Siri reveals the iPhone 6S and 6S Plus
Finnish start-up, split, is all set to grab a share in cab hailing business of India