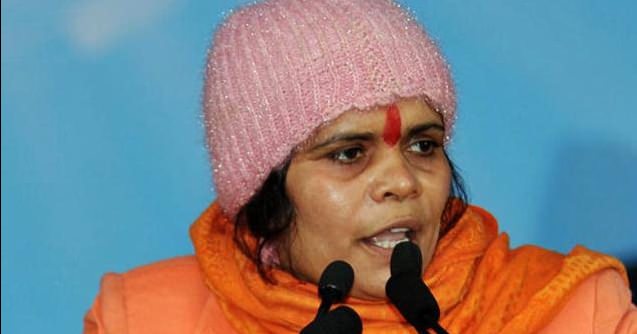 VHP leader Sadhvi Prachi is back in the news for her latest statement that defies logic itself. Following BJP MP Sakshi Maharaj’s claim that the Nepal earthquake was caused by Rahul Gandhi’s visit to Kedarnath, Sadhvi Prachi further added fuel to the fire by quoting a similar statement, as reported by The Tribune – “This is due to the visit of Rahul Gandhi, who is a non-vegetarian. He did not take holy Ganga dip. He should have first purified himself. This disaster in Nepal and northern India is due to Rahul’s visit.”

The Times Of India earlier reported Sakshi Maharaj saying – “Rahul Gandhi eats beef, and goes to the holy shrine (Kedarnath) without purifying himself. The earthquake was bound to happen.”
The online community did not take these statements lightly due to the sensitivity of the tragedy in Nepal that has killed over 4000 people and has resulted in massive loss of property and heritage.

There are some natural disasters we can do nothing about. Just accept and move on. No, no, not earthquakes. I’m referring to Sakshi Maharaj.

Sadhvi Prachi ji, I had chicken and shrimp this weekend, what kind of calamity can I expect. https://t.co/0Fw0A8JjUK

This is not the first time Sadhvi Prachi has come under scrutiny for her senseless quotes. She was earlier reported to have said “Those who do not chant ‘Bharat Mata ki Jai’, ‘Vande Mataram’, insult the national flag and those who indulge in cow slaughter have no right to live in India.”