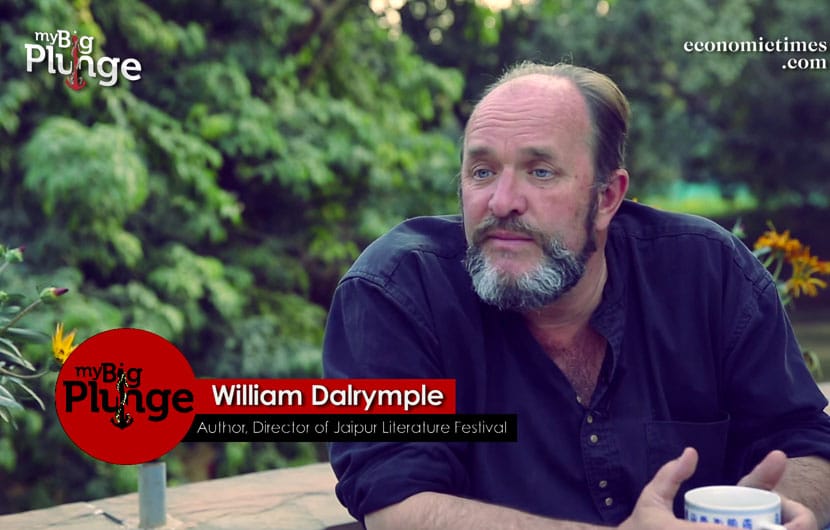 William Dalrymple, founder and director of the Jaipur Literature Festival, in a tete-a-tete with us discussing the makings, including controversies and all things JLF

The upcoming edition of the Jaipur Literature Festival marks its 10th anniversary and meteoric rise from a gem of an idea into becoming what is called the biggest free literary festival on earth. Over the years, the festival has hosted 1300 speakers and welcomed nearly 1.2 million book lovers. The festival, back its home in Diggi Palace, Jaipur, is expected to welcome over 250 authors, thinkers, politicians, journalists and popular culture icons this year.

In the lead up to the 10th year anniversary, the festival is releasing a list of 10 speakers every week. Here’s the final list of speakers announced:

2016 Man Booker Prize-winning author for his book The Sellout, Paul Beatty will be making his first appearance at the Jaipur Literature Festival (JLF). Beatty’s The Sellout had also won the National Book Critics Circle Award. His career began as a poet in 1991, where he published the anthologies Big Bank Take Little Bank and Joker, Joker, Deuce and the novels, The White Boy Shuffle, Tuff and Slumberland.

Author of the graphic novel Kari, Amruta Patil is also a writer and painter. Kari was shortlisted for the Shakti Bhatt First Book Award, Adi Parva: Churning the Ocean, which was selected as one of 2012’s best graphic novels by comic book historian Paul Gravett and her latest is titled, Sauptik: Blood and Flowers. Amruta, who will also be making her first appearance at the JLF this year, has a style that incorporates acrylic painting, collage and charcoal. Recurring themes in her work include memento mori, sexuality, myth, sustainable living and the unbroken thread of stories passed down from storyteller to storyteller through the ages.

Returning to the festival is actress, screenwriter, child rights activist and children’s author Nandana Sen. She has starred in several feature films from multiple countries, in multiple languages and has also performed on stage. Apart from writing several screenplays and translating the works of her mother, Nabaneeta Dev Sen – a prominent author in contemporary Bengali literature – Nandana has also written published her first children’s book in May 2016 titled Kangaroo Kisses.

Film director, screenwriter, novelist and short-story writer, Neil Jordan will be making his debut appearance at the upcoming edition. He had won a Somerset Maugham Award and the Guardian Fiction Prize in 1979 for his first book – Night in Tunisia. In 1992, his film The Crying Game won an Academy Award for Best Original Screenplay. The three novels he has published are titled, The Past, The Dream of Beast and Sunrise With Sea Monster. His films include, The Company of Wolves, Mona Lisa, which won a Best Actor Golden Globe for Bob Hoskins, and Interview With A Vampire.

Valmik Thapar has spent four decades serving the cause of wild India. During this time, he has authored, co-authored and edited more than 25 books and made or presented nearly a dozen films for the BBC and other networks on the tiger and Indian flora and fauna. His last book was Saving Wild India: A Blueprint for Change, which sought to provide workable solutions to protect India’s wildlife. Other recent books include Winged Fire, the concluding book in the trilogy that features Wild Fire and Tiger Fire. Thapar is also the founder of the Ranthambore Foundation, a major non-governmental organisation dedicated to conserving wildlife. He is currently a member of the Rajasthan Board of Wildlife and has helped the state government formulate the Van Dhan Yojanaa, a holistic forest conservation scheme.

Sadhguru is a yogi, mystic and New York Times bestselling author. His latest book is titled Inner Engineering: A Yogi’s Guide to Joy. He has spoken at numerous prestigious events such as the UN Millennium World Peace Summit, TED Talks, the World Economic Forum and the Indian Economic Summit. Sadhguru is also the founder of Isha Foundation, an international, nonprofit, volunteer-run organisation with over 7 million volunteers across the world. The Isha Foundation runs large scale grass root projects in health, education and environment and includes Isha Vidhya, a rural education project, and Project GreenHands, the largest ecological project in Asia having planted over 27 million trees.

Former diplomat, Shahi Tharoor is a politician, Member of Parliament and Chairman of the Parliamentary Standing Committee on External Affairs. He is also an acclaimed author of 15 works of fiction and non-function. Apart from working as a contributing editor for Newsweek International, he has written for publications such as The New York Times, The Washington Post and the Times of India and he continues to write an internationally syndicated monthly column for Project Syndicate. His works of fiction include The Great Indian Novel and Show Business, and his non-fiction work includes India: From Midnight to the Millennium, Pax India: India and the World of the 21st Century and, most recently, An Era of Darkness: Empire in India.

Attending the Zee Jaipur Literature Festival 2017 is British film director Stephen Frears whose movies include Dangerous Liaisons, High Fidelity and Philomena. He has been nominated twice for Best Director at the Academy Awards, once for The Grifters and for The Queen. His most recent release stars Hugh Grant and Meryl Streep and is titled Florence Foster Jenkins. It has been nominated for four Golden Globes, including Best Motion Picture – Musical or Comedy and is also tipped for nods at the 2017 Academy Awards.

Rishi Kapoor is one of India’s most popular film stars. He debuted as a child actor in his father Raj Kapoor’s magnum opus Mera Naam Joker, winning a National Award for his performance. His first lead role came with Bobby, a blockbuster that established a new template for the teeny-bopper romance in Hindi cinema. In the 1970s, a decade known for Amitabh Bachchan’s ‘angry young man’ films, Kapoor not only held his own but also carved a niche for himself in a series of musical hits like Khel Khel Mein, Laila Majnu, Hum Kisise Kum Naheen, Sargam and Karz. He was also the perfect foil to Bachchan in some of the most celebrated hits of the era like Kabhi Kabhie, Amar Akbar Anthony, Naseeb and Coolie. Over the last decade, Kapoor has delivered some of the finest performances of his career in a diverse array of roles ranging from a middle-class school teacher in Do Dooni Char, a dreaded don in D-Day, a pimp in Agneepath and a naughty grand old patriarch in Kapoor & Sons; far removed from the chocolate-boy romantic hero of the 1970s.

Tamil writer, journalist and columnist, Vaasanthi will be returning to ZEE Jaipur Literature Festival in 2017. She has published thirty novels, six short story collections, four volumes of journalistic articles and four travelogues in Tamil in a career spanning over 40 years. In addition to Indian languages such as Malayalam, Telugu, Kannada and Hindi, her works have also been translated into English, Norwegian, Czech and Dutch. Two of her works were even adapted as Malayalam films. She has received several awards including Uttar Pradesh Sahitya Sanstan award and Punjab Sahitya Akademi award for her novels that were translated into Hindi and English respectively. Her latest book is a biography of the late firebrand Tamil Nadu Chief Minister, Jayalalithaa titled Amma: Jayalalithaa’s Journey from Movie Star to Political Queen.

Since its inception, the festival has been involved in several controversies and such issues. We caught up with the founders of the festival for a tete-a-tete and here’s what they had to say:

Cancel reply
Netflix documentary, One in a Billion follows Satnam Singh Bhamara’s journey into NBA
You can refuse to pay the service charge in restaurants and hotels: Govt

Delhi HC refuses to stop release of “The Conversion”

Three let off by NCB after raid, two of them had invited Aryan Khan, claims Maha Minister