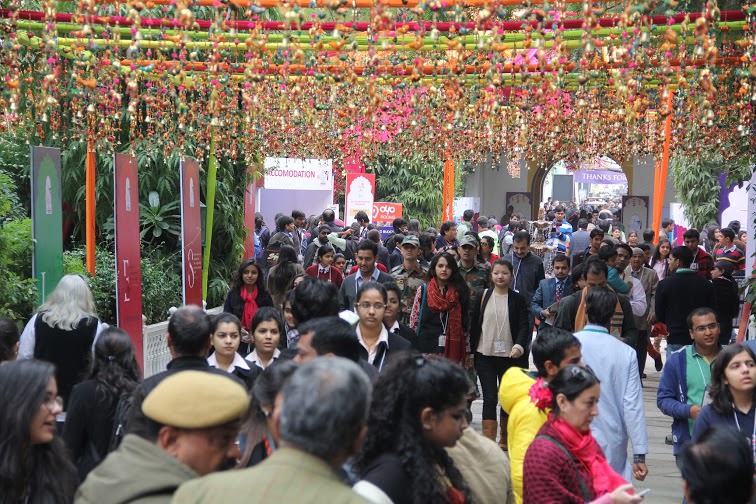 The first day of the ZEE Jaipur Literature Festival’s ninth edition saw audiences flock to a vibrant mix of sessions focusing on privacy, the environment, big personalities and moving personal stories and everything in between.

The festival opened to a packed audience at the Rajnigandha Silver Pearls Front Lawns, which filled with the spellbinding performance by classical singer Gaayatri Kaundinya, followed by a highly atmospheric performance of traditional Rajasthani folk music, including a rousing fanfare of ceremonial drumming and horns, led by Nathoo Lal Solanki and Chugge Khan.

The Chief Minister of Rajasthan, Shri Vasundhara Raje welcomed the audience and described the ZEE Jaipur Literature Festival as ‘the greatest equalizer’. She recalled her lifelong passion for books, and how she used to read in secret under the covers and thanked all writers for being ‘the creators of dreams.’

Margaret Atwood held the audience spell bound with the opening keynote address ‘Writing is the means whereby light is shed on darkness. There are many darknessess but also many voices.’ Atwood declared. She joked, ‘To be invited as a Keynote, I must either be very important or very old.’She has visited India three times before, but the last time was twenty-seven years ago.  Atwood emphasized the important role played by key stories in building and protecting culture. She expressed her excitement to be visiting India, observing that Indian cultureis unique, due to its extreme variety and multiculturalism. She found it fascinating that two citizens of India who don’t speak the same language can still talk to each other in a third.

There has been much anticipation around much-loved author Ruskin Bond’s first appearance at the Festival and on January 21st, a packed out Char Bagh Tent celebrated him in a session which was funny, poignant, and heart-warming. Ruskin Bond talked about his life as a young boy, finding his way into writing and gave the audiences tips for a rich life which the audience enjoyed sharing on twitter.

The air may have been crisp and clean in the Google Mughal tent, but it was the The Clean Air Act of 1981 and its apparent lack of implementation that was discussed in Red Signals, Green Hopes. It was a passionate discussion with Ajay Mathur, Director General of the Bureau of Energy Efficiency fresh from representing India’s interests at the Paris climate talks in December. It was clear from the closing questions that India’s approach to clean energy must be sensitive to the complexities of Indian society. Twenty percent of Indians still do not have access to electricity, and a mandatory transition to clean energy is arguably not realistic for many people.

The inspiring life of Subhash Chandra, chairman of ESSEL Group and ZEE, provided a perfect example of how perseverance and belief can lead you to achieve big ambitions. Chandra threw a fascinating light on how he developed his business acumen, and grew an empire from such small beginnings, facing enormous challenges along the way: ‘I was driven by my passion to do something different which never existed before in India. I was committed to my vision and in the process, surpassed many obstructions pertaining to finances, expertise and industry challenges.’

As expected, veteran investigative journalist MJ Akbar discussed the more sensational parts of the book, quipping that it was ‘explosive, much bigger than a nuclear bomb.’ Subhash Chandra’s life has clearly been full of ups and downs. The charismatic entrepreneur held the audience in thrall as he described his rags to riches story.

Molly Crabapple joined William Dalrymple in an electric session at the Mahindra Humanities Centre Durbar Hall. Crabapple spoke movingly about her experience of creating illustrations and subtext for her work on Syria. Her poignant images were displayed on a projector for the ZEE Jaipur Literature Festival audience to see: one sketch of a woman going mad in the aftermath of a bombing was particularly striking. Crabapple said that she draws because she wants to ‘restore the dignity of people’ when war takes it away. The pictures that emerged from Syria are full of gore, but her art establishes the essential humanity of citizens in the wake of horrifying oppression.

The Ballad of Bant Singh was a thoroughly invigorating session in which Bant Singh and Desraj Kali in conversation with Nirupama Dutt talked about Singh’s battle against the oppression of the Dalit in Pujab. Songs were sung in rural Punjabi which had a very different note, very much one of a kind and which everyone thoroughly enjoyed whether they understood them or not. It was an inspiring and amazing experience.

The day was still rounding up and many other exciting sessions were still to come including readings from Jerry Pinto, PriyaSarukkaiChabria and Ila Arab Mehta; Booker Prize winner Marlon James appearing in two sessions at the Google Mughal Tent and the Char Bagh; Ben Macintyre’s fascinating novel on notorious British spy Kim Philby; and Christina Lamb discussing the fate of Afghanistan.