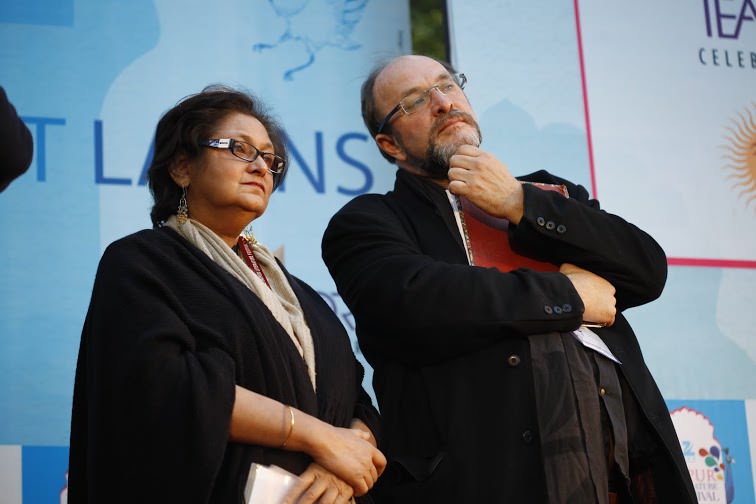 The 9th edition of the ZEE Jaipur Literature Festival is set to open tomorrow morning (January 21st) till January 25th. The event, which is one of the largest free literary festivals, is set to bring together renowned national and international authors and speakers, public figures and musicians.

Each year the Festival uses literature as a catalyst for debate covering everyday issues from the personal, such as privacy and gender — to nationwide and global issues such as the environment, economics, modernity, language, migration and conflict. This year too, the ZEE Jaipur Literature Festival aims to remain an agenda setter, bringing together many perspectives and allowing a wide range of authors and speakers to be heard and to discuss.

This year the Festival will expand beyond the four walls of Diggi Palace with over 200 events in 10 venues, including the Music Stage at Clarks Amer, the Jaipur Book Mark at Narain Niwas and two special evenings at Amber Fort and Albert Museum, JLN Marg on the 22nd and 23rd focused on bringing together built heritage and the creative arts for a dynamic cultural experience, supported by Rajasthan Tourism.

The Festival will play host to over 360 speakers and over 100 musicians, who will be provided with 18,000 hot meals over the five days, The Festival, produced by Teamwork Arts, has an essential team of 325 volunteers and a crew of 600 who make the event run smoothly.

The ZEE Jaipur Literature Festival is supported by a range of sponsors who help support the breadth of writers attending from India and abroad, to keep the Festival free to all, and to enhance the experience of the thousands of people who flock to the Festival.

Some of the other partners of the festival are Airtel, Uber, Kotak Mahindra Bank, IndiGo and Dettol. Dove, Nestle, State Bank of Bikaner and Jaipur, Narayana Health, AU Financiers and Getty are other sponsors who have come on board for the first time.

Teamwork Art’s new mobile app for the Festival gives visitors an easy way to plan, schedule, look up information and maps and stay on top of the Festival’s blog and other news.

Over the next five heady days, ZEE Jaipur Literature Festival will welcome major prize winners including Marlon James who won the Man Booker Prize in 2015 for his epic and visceral novel A Brief History of Seven Killings and photographer Steve McCurry who won the Robert Capa Gold Medal for Photographic Reporting.

There will also be a strong line up of some of the world’s most beloved and prolific writers including poet, novelist and essayist Margaret Atwood; Hindi journalist, poet and novelist Uday Prakash, one of the leading figures in modern Indian literature; Colm Toibin, Ireland’s greatest living writer; India’s most celebrated psychoanalyst and author Sudhir Kakar;  French economist and global voice on wealth and income inequality Thomas Piketty; and creator of one of the landmarks of modern American literature Tales of the City Armistead Maupin.

William Dalrymple, author and co-Director of the ZEE Jaipur Literature Festival, said, “Each year we showcase literary India to the world, and world literature to India. This year’s programme is our biggest and most exciting yet. Bring it on!”

The visual arts will add to the atmosphere and the rich visual setting of the ZEE Jaipur Literature Festival with contributions from Orijit Sen, Ujan Dutta, Cartist, Dimpy Menon, and Ojas Art Award winners – Santosh Kumar Das and Mahalaxmi and Shantanu Das who will showcase highlight works on Mithia /Madhubani Art;

Mornings and evenings at the Festival mean time for music with soulful openings and foot tapping culminations for each day’s programme. Some of the most popular and exciting names in music join the Festival this year on the — A Financiers Music Stage including Kutle Khan, Midival Punditz, Skavengers, Mrigya, Karsh Kale, Swarathma, Mukhtiyar Ali, Gaayatri Kaundinya and Amrit Kaur Lohia

Jaipur BookMark, ZEE Jaipur Literature Festival’s publishing professionals networking hothouse also opens its two day programme tomorrow, providing the industry with a space to do business. JBM will see 63 speakers from 12 countries in 16 sessions over two days, 21st and 22nd January. Translation is the major focus and 2016 sees a new initiative, the launch of the first Teamwork Arts and Jaipur Bookmark Global Rights Translation Catalogue which showcases translations from 6 languages across India, including Hindi, Kannada, Assamese, Rajasthani, Bangla and Gujarati.

Sanjoy Roy, Managing Director of Teamwork Arts, producer of the Festival, said, “The ZEE Jaipur Literature Festival has become synonymous with the best creative minds on the planet. Each of them brings their own unique voice to the festival, adding up to a multitude of views and opinions which make the festival a banquet of ideas. For 2015, we have worked with our sponsors to offer new experiences and opportunities to our 2 lakh visitors. We are grateful to all our partners, without whom, we wouldn’t be able to stage the world’s largest free literary festival each January in Jaipur.”