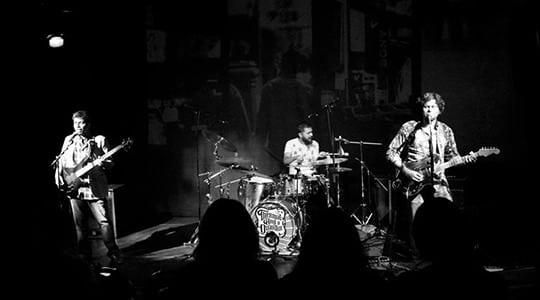 For the music enthusiasts of Bengaluru, Thermal and a Quarter or TAAQ as it is popularly known, is a band that has always been a staple showcase of the city’s culture and homegrown talent. Formed in 1996, TAAQ has come a long way and has garnered a loyal fan base all over the world. Consisting of Bruce Lee Mani on guitar and vocals, Rajeev Rajagopal on drums and Leslie Charles on bass – TAAQ has transformed from an ambitious college band in the 90s to an international name to reckon with.

In an exclusive interview with My Big Plunge, Rajeev Rajagopal speaks about how the journey has been for the band and how the indie music scene has evolved over the years.

MBP : TAAQ has a history which spans almost two decades. How did you guys start the band ?

Rajeev : We started in 1996. We were a band belonging from Christ College, Bangalore. That’s where we met and started jamming together. We took part in a lot of competitions and won almost all the college competitions. Later we started taking part in semi-pro category. We did really well there. Soon after we decided to go pro and we started getting calls for shows and headlining college fests. Since then, there’s been no looking back.

MBP : Your music is often termed as ‘Bangalore Rock’. How has the city influenced your style?

Rajeev : Totally – it’s been a massive influence. As musicians, we are always looking for inspiration and in the last 20 years, what has happened to Bangalore – it has transformed completely. It’s just exploded and become an international city. When we’d started, Bangalore was just a small town. The IT boom hadn’t taken place yet. We didn’t have an international airport. We didn’t have internet. So it was a really small town in 1996. With the changes that the city has seen, even the people have changed. There are so many kinds of people in Bangalore today. So there are a lot of things that we miss about the old Bangalore when we started out. But there are many things that we never imagined would happen. We’ve seen so many new venues and so many international bands playing here. So in every song we write, there’s a definite Bangalore touch. Most importantly, when we go abroad to play, wherever we play, we play to an international audience which is not restricted to just Indian listeners. So a lot of people give us feedback that the connection with us and Bangalore comes out with our music and lyrics.

MBP : TAAQ has a diverse range of influences – from rock to blues and jazz as well. Which are the international names and influences that you look up to?

Rajeev : There are a lot of them. Contemporary bands would be like Dave Mathews Band, Steely Dan – it’s always been a band thing for us. The chemistry between all of us playing together is quite different from one man hiring session musicians. So we’ve taken lot of inspiration from ourselves – we’ve stuck together and played for a long time.

MBP : The Bangalore crowd is a little inclined to listening music that pertains to the 70s and 80s i .e ‘old school’ music. You can hear such music in bands like Kryptos, Theorized. Even in local pubs you hear a lot of classic rock like Led Zep, Deep Purple etc. Why do you think the crowd there swears by its classic rock?

Rajeev : That’s quite simple because that’s the best form of music out there. If you listen to what’s out today, you won’t find an enigma that’s there in a classic rock band. Bangalore is special – there are so many international bands that have travelled here. You have the Rolling Stones, Guns N Roses, Metallica, Aerosmith, Mark Knopfler, Sting, Iron Maiden –  these bands are known all over. So Bangalore has always had a good history with great music.

MBP : What do you think of bands like The Raghu Dixit Project , Indian Ocean and Swarathma who use local influences and cultures in their style?

Rajeev : It’s amazing to see original bands coming from here. There’s nothing wrong if you are a full-fledged cover band but the legacy that you leave behind – that really matters. Bands like Indian Ocean, Swarathma, Raghu Dixit Project – we relate a lot with them. The difference is, we were born and brought up in Bangalore and we think in English so we’re the English version of these bands. It’s just that the language and influences are different.

MBP : Despite the talent that indie musicians have and so many initiatives that promote such music in India, there’s still a long way when Indian audiences will embrace this sector of the music industry? Who is to blame? Is it Bollywood or just the attitude of the general public?

Rajeev :I don’t think you can put a blame on anyone. If there was one particular entity that I would give the responsibility would be radio. There is no reason whatsoever why Indian radio stations can’t continuously play music by Indian bands like how they play international bands as well as Bollywood. They never do that with Indian bands. They don’t go into anything non-Bollywood. Internationally, radio educates the audience about new and upcoming bands. Bollywood does not need any extra exposure since it’s all over the place.

MBP : The last few years, there’s been a massive rise in the electronic/EDM scene in the indie music industry. In cities like Mumbai and Delhi, there are more gigs which have EDM artists instead of having rock,blues or metal gigs with live instruments. Venues too have become scarce for live bands. Why do you think this shift is happening as it greatly affects live bands?

Rajeev : It’s like comparing apples and oranges. They are two totally different forms of entertainment. The experiences are different. EDM gets people to disconnect from their reality just like Bollywood so they can enjoy. Live acts need a little bit of effort from the audience as well. If people do not have the time and patience for that, it’s totally fine. Compare them like big fat novels to advertising copy lines.

MBP : There’s a plethora of extreme metal bands coming from Bangalore, Mumbai and Delhi who are creating a modern metal sound, some of them even playing at prestigious International festivals like Wacken Open Air, Download Festival etc. What do you think of the Indian Metal Scene?

Rajeev : I think the Indian metal scene is totally amazing. In fact, it’s one of the most unadulterated and genuine scenes that are there in the music industry. It is very honest and completely fan-driven. If you notice, the metal scene is all about the band. That’s the core difference between the metal scene and every other scene out there. It’s about what the band can do as a unit and the same energy transfers to the crowd. It’s never about one person.
Since TAAQ started, there were bands like Millennium, Crimson Storm – these guys were part of the scene. Then came Kryptos and now you have Skyharbor and Inner Sanctum.

MBP : The NH7 Weekender started a few years back, dedicated primarily to showcase the indie music talent along with a few international headliners. However, an increasing trend has been seen where more and more commercial music is been targeted. Do you think this is harmful for the indie ecosystem or is it a blessing in disguise?

Rajeev : I think that’s terrible. The last NH7 had a few Bollywood acts as well. As a fundamental ethic, its terrible because like I said earlier, Bollywood really doesn’t need the support from mega sponsors and big organized festival setups. They’ve got enough options. It’s really important that big professional organisations like NH7 support and program local acts as a priority over international acts. We’ve played a lot of international festivals and all of them have a lot more local acts than international ones. I understand it’s a business call and there’s no discredit to them holding one of the best music festivals but that does not make an excuse to let them continue with prioritising Bollywood.

MBP : Which are the best venues you have played in India? Any particular show you are really fond of?

Rajeev : There are many nice venues we’ve played at. There’s Indian Habitat Centre in Delhi. Then there’s Someplace Else in Kolkata. The vibe is really amazing there. We’ve had some magical gigs in BFlat in Bangalore. In terms of technical terms, Indigo Bar in Bangalore is really good. It’s also really good to see new venues like Blue Frog and The Humming Tree coming up.

MBP : Name any five bands from India that you guys really like.

MBP : Any new Indian bands that have caught your eye?

Rajeev : The ones I can remember now are Opposite Sex and Skyharbor.

MBP : An indie band in the country is nothing less than launching a start-up. How has TAAQ’s journey been in all these years?

Rajeev : We’ve taken the plunge twice. The first time we quit all our jobs and tried to do music full time. We didn’t do that well honestly. After a year, we were completely broke and we had to shamelessly go back to looking for jobs.
Second time we took the plunge was a little more organised and planned. So we put together our students and formed our academy. We also had a more focussed way of running the band. Now it’s been seven years that we’ve been doing this full-time. The academy has really taken off. You have to take the plunge. If you fail, you take it again.