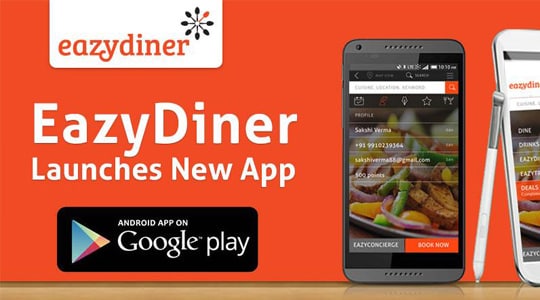 EazyDiner exists in such a space that is already teeming with competitors, the biggest one being Zomato which recently added its table booking service. However, EazyDiner brings freshness to the table of restaurant apps by using curated content instead of unmoderated user generated reviews.
Famed food critic, journalist and founder of EazyDiner Vir Sanghvi explains – “Every review is vetted by me before it goes online.”

While Zomato relies on user-generated content which is simple to generate and manage, inconsistency issues can occur. EazyDiner aims to remove this factor by having its content moderated.

Launched in Delhi earlier this year by Sanghvi and other restaurateurs, EazyDiner received its seed funding from DSG Consumer Partners. It has now announced its series A funding from DSGCP and Saama Capital. In the past seven months, it has expanded to Mumbai and has booked over 10,000 diners.

The majority of high-end restaurants in India do not prefer listing themselves on to a food app but EazyDiner’s curated content is encouraging them to do so due to the presence of credible information and service.

“It is very hard to get into restaurants like Masala Library in Bombay or Indian Accent in Delhi, but we have an allocation. So they will keep a table everyday at lunch time for EazyDiner guests and will only give it away say an hour or so before lunch if we can’t use it,” explains Sanghvi.
EazyDiner claims to be the only service in India offering real time guaranteed restaurant reservations. Apart from that, booking through EazyDiner will let you get a free drink or dessert or a discount as well.

Classifieds start-up Qyk raises $1 million in pre-series A
Thermal and a Quarter : You have to take the plunge. If you fail, you take it again.