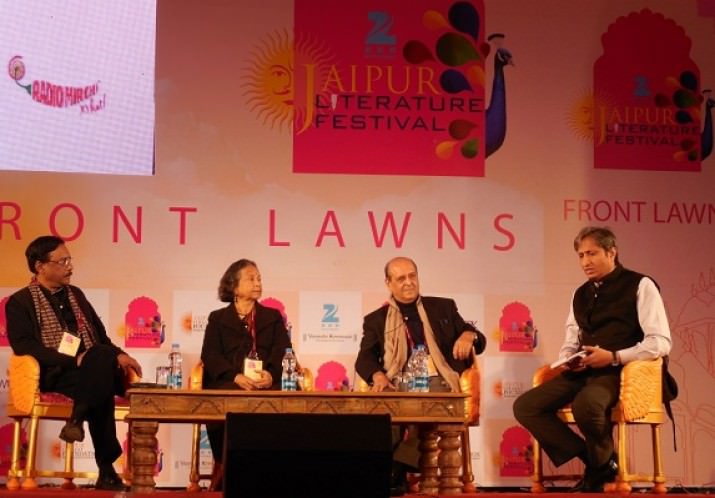 The fun-filled Jaipur Literature Festival took and continues to take its audiences behind the scenes of conflict, unrest in the Middle East, and the destruction of cultural heritage in many of its sessions. These topics were explored by great minds from around the world including Christina Lamb, Margaret Macmillan, Anthony Sattin, Dexter Filkins, Samanth Subramanian, Ayesha Jalal, Vekat Dhulipala and James Cuno at the Festival.

The idea of Pakistan, exemplifying both instability and resilience remains riddled with contradictions. Christophe Jaffrelot, Ayesha Jalal, Venkat Dhulipala and Sudhir Chaudhary examined the history of democracy in Pakistan in the context of Islam, ethnic strife and an entrenched elitism in the session The Pakistan Paradox.

Christina Lamb told audiences how the West turned success into defeat in a fiasco which has left Afghanistan one of the poorest and most dangerous nations on Earth in Farewell Kabul: From Afghanistan to a More Dangerous World.

A million Indians fought in the First World War while for the Second it fielded 2 million men, the largest volunteer army in world history. But until now, India’s role in both conflicts has been marginalised and forgotten. Three distinguished authors, Shrabani Basu, Yasmin Khan and Raghu Karnad will discuss conflict and memory in Farthest Fields on Monday (January 25th).

The beautiful and conflicted landscape of Kashmir has provoked both fierce emotions and vulnerability in its writers. Author and filmmaker Siddhartha Gigoo and journalist, broadcaster and Pahadi activist Sahil Maqbool have been inspired by Kashmir including its history and conflict literature and this issue will be explored with Namita Gokhale on Monday in Kashmir Readings.

Five of the world’s most acclaimed war correspondents, Dexter Filkins, Christina Lamb, Don McCullin, David Grossman and Samanth Subramanian form The Frontline Club, delved into the reality versus Hollywood glamour of life as a war correspondent.

One of the world’s greatest living photographers, Steve McCurry smuggled film out of Afghanistan in the wake of the Soviet invasion sewn into his clothes. His exceptional courage and enterprise revealed the first images of the conflict and established his focus on the human consequences of war explored on Saturday in Beyond the Afghan Girl.

Whether antiquities should be returned to the countries where they were found is one of the most urgent and controversial issues in the art world today. President and CEO of J. Paul Getty Foundation, James Cuno is outspoken on the subject. In one of the sessions, Cuno challenges this nationalistic position and argues that in a time where IS is destroying symbols of nations’ cultures we should view and share our treasures transnationally, also allowing their protection and global celebration.

Gaza has become synonymous with conflict and pain. Though only 140 square miles, the small territory has been a hotbed of bitter disputes over millennia. Palestinian writer Susan Abulhawa, Omar Barghouti, the Founder and Chairman of Forward Thinking, and artist Molly Crabapple discuss the territory that symbolises all that is most painful in the tragedy of the Palestinians in Eyeless in Gaza on Sunday.

William Dalrymple, writer and co-Director of the ZEE Jaipur Literature Festival, said “We’ve always had a very strong tradition of inviting writers on the Middle East to Jaipur, but this year we have a truly extraordinary line up. We will look in detail at the turmoil in the Middle East- the Shia Revival, the oppression of the Palestinians, and the rise of ISIS, though the words of some of the most illustrious authors on the region:  Laleh Khalili, David Grossman, Vali Nasr, Omar Barghouti and Mona Eltahawy. We will also examine the historical roots of the conflict: in A Peace to End All Peace four leading scholars of the Ottomans, the Armenian Genocide and the First World War, Eugene Rogan, Margaret Macmillan, Ronald Suny and Anthony Sattin show how the choices made between 1918 and 1921 set the Middle East along a road that led to the conflicts and confusion that continue to this day. We will also be examining the destruction of cultural heritage and looking at the future of the region with experts as diverse as James Cuno of the Getty and the celebrated war correspondent, Christina Lamb.”