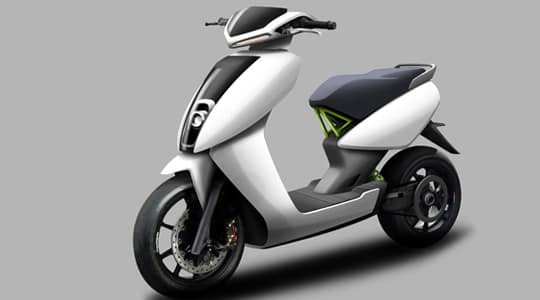 The Indian automotive industry needs a makeover and Ather Energy may just be the right name for this change. With the start-up industry becoming a possible way to combat various forms of industry crisis, Ather Energy has taken the step to bring electric vehicles in the vast automotive industry.
Ather’s origin goes back to an idea conceived by founders Tarun Mehta and Swapnil Jain who had a history of working together in IIT Madras. They figured out that there was a chasm between the manufacturing segment and consumer base. To counter this, Ather Energy focused on the failure points that the electric automotive industry has been facing.
“Top speed of 25km/h – people run faster than that, battery replacement issues, long charging times – these were some problems that this sector was facing. Our thought was not ground breaking but we thought of a few ways to revamp it up. “ said Mehta.

Mehta and Jain soon realized that their destiny was in a start-up and thus, they left their jobs in 2013 and came back to IIT where they received support from their faculty. Initially, it seemed that the battery was the main pain point but soon they decided on revamping the entire vehicle. Starting from the battery charging system to the aluminium chassis, Ather put its efforts in creating the perfect electric vehicle that India needs.
With an angel funding worth $80,000, Ather started putting up a team and began building various prototypes. By mid-2014, the basic pooling stage had initiated but there was still a shortage of capital. Once again, Mehta and Jain started scouting for investors with an aim to raise a minimum of Rs. 3 to 4 crore.
The problem was, investors were hard to convince as they perceived a manufacturing start-up as ‘uninteresting’ which may be threatened by competition too. Globally, Tesla was the only company that was making waves in this industry. However, rejection did not help the Ather team back and they continued to look for investors – entrepreneurs who themselves admired.

Their mentor came in the form of Sachin Bansal, founder of Flipkart. He assured Mehta and Jain that they were on the right track and they do not need any changes in their model, instead they need right-minded investors who can back their plan.
With a confident approach, Ather was soon funded by the Flipkart guys towards the end of 2014 – a much needed financial push that helped them to expand further. Investor attention had increased by then and Tiger Global showed a healthy interest in the electric vehicle segment.
Ather Energy finally had a strong financial foothold and they got to work right away to improve their product. Beta customers came out with very positive responses.

When asked about the importance of cleantech in the automotive industry, Mehta spoke about how it is all set to grow in the future.
“Everybody including the people in industry acknowledge and agree that it’s going to be super big in next 5-10 years – the question for them is when will it become interesting enough for them to enter. I think in the next 5 years or so electric vehicles will start to run in mainstream across the country. There have been many technological improvements on the battery front, energy storage, supply front, solar chargers – the cost of the vehicle may soon be down to a regular petrol vehicle. ” said Mehta.

Mehta also spoke on how the journey has been in building the code named prototype S340.
“The numbers have added up now but the journey has been phenomenal. It’s an engineer’s dream to be a part of something like this where one can work on so many parts and so many technologies. Starting from electronics to hardcore mechanic and design manufacturing, the ergonomics, all the prototype testing, going to the market and looking for customers – it’s been a phenomenal experience” said Mehta.
With their office in Bangalore, Ather has expansion plans to move to Delhi and Chennai next. If that goes smoothly, then other cities are in tow as well. A similar approach will be done for the physical marketing of the product as well. Starting with Bangalore, Ather will hold test rides for customers and then soon move to other places.

On the manufacturing front, Ather follows what most automotive companies in India do.
“We have vendors and suppliers. They will provide the hardware components and we will do the final build. We control the quality and production. Part manufacturing will be done by independent suppliers. “said Mehta.
When asked about challenges, Mehta said that it is the creation of the Ather team that was the most difficult part in its tenure. Software companies/ start-ups can imitate team-building models from other companies but for an automotive company, it is a little more complicated than that. However, Ather has come into a time when the regulatory framework has been quite supporting since it bonds with the common man.

Mehta also said about the importance of designing and conceptualization of a vehicle in India. The Indian automotive industry often borrows or implements technologies and designs that arrive from foreign shores. Mehta stressed on the fact that unless the vehicle is not designed catering the problems the country has, the product will never work. He further added that such an approach should be followed by all sectors of the automotive industry. However, he also said that lot of companies in India are not product companies. There are good manufacturers, suppliers, marketing spaces. If the product front is addressed, then the entire ‘Make In India’ concept comes to play here.

On an ending note, Mehta advised budding entrepreneurs to stick to their plan no matter what happens. Mehta says “You have a plan and an investor backs your plan. You do not change your plan for an investor. The moment you do that, your original idea, your original passion – that gets altered. If your plan is good enough, you will find all the support you needs. “ Adding to that, Mehta said that patience and perseverance play a key role in his work ethics.
Ather Energy plans to release their much-awaited product by the first or second quarter of next year. If the product is successful, the automotive industry and the public will surely embrace it and invite more offerings from the Ather camp.

HelpMeDoc bridges the gap of doctors and patients
An ode to entrepreneurship: Naukri.com Founder Sanjeev Bikhchandani