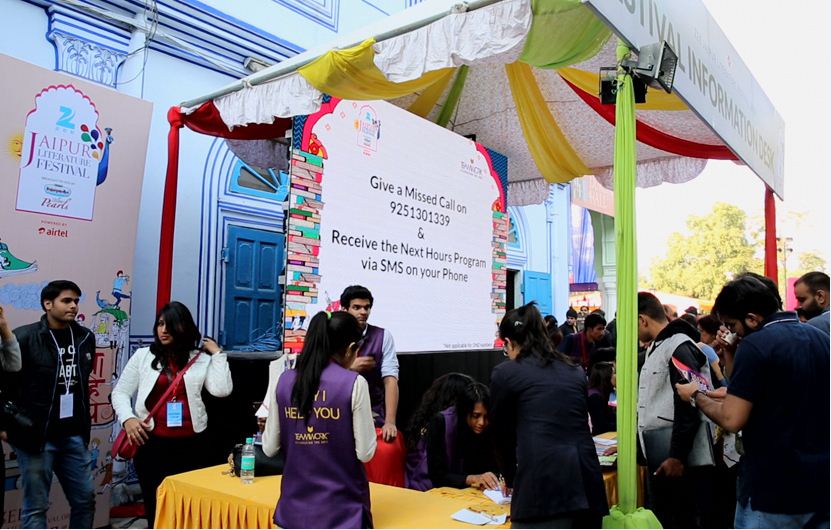 In the decade since its inception, the Jaipur Literature Festival has gone from a small gem of an idea to the world’s largest free literary festival. Having hosted more than 1300 speakers and in these past years, it is expected to host over 250 authors, thinkers, politicians journalists and popular culture icons this January.

Returning to its home, Diggi Palace in Jaipur, the festival will place some of the greatest wordsmiths and intellects from all walks of life on one stage. the 2017 edition marks the 10th year anniversary of the festival and to celebrate it, the festival is releasing the names of 10 speakers every week leading up to the festival in January. The sixth list announced is as follows:

Academic, historian, writer classical singer, Dr. Reba Som will be returning to the Jaipur Literature Festival in 2017. She is also the director of the Indian Council for Cultural Relkations’ Rabindranath Tagore Centre in Kolkata. Her book on the life and works of Tagore, Rabindranath Tagore: The Singer and his Song was published in 2011 in addition to a CD she has released – being a trained singer in Rabindrasangeet. Her CD contains English translations and transliterations of Tagore’s lyrics.

Writer at the Indian Express and techer at Ashoka University, Vinay Sitapati is political scientist, journalist and lawyer. He has studied at Harvard university and National Law School Bangalore and is currently finishing his PhD from Princeton. His first book is available in three languages and is titled Half-Lion: How PV Narasimha Rao Transformed India.


CEO of McCann World group India and Chairman (Asia-Pacific), Prasoon Joshi is a renowned Indian lyricist, poet, writer and screenwriter. He was awarded the Padma Shri by the Government of India for his contribution towards the field of Arts, Literature and Advertising in 2015.

Recipient of the 2016 Jigme Singye Wangchuck Prestigious Journalism Award, Kunga Tenzin Dorji is a free lance journalist and a self-confessed jack-of-all trades. He has acted in several films and is also one the best known rock musicians in Bhutan. While hosting a talk show on Radio Valley, he also writes scripts, narrates documentary films and contributes to various publications.

Known for his studies in the slavery in Mauritius, Dr. Issa Asgarally is a highly regarded intellectual who is a doctor in linguistics and a professor at the Mauritius Institute of Education. He is famous as a prolific writer in the international community. He has published 11 books and essays on the topics of literature and society, slavery and history, cultures in Mauritius, books and ideas, Mauritian media and interculturality.

Returning to the Jaipur Literature Festival is David Cannadine FBA, Dodge Professor of History at Princeton University. Knighted for ‘services to scholarship’ in 2009, Sir David is the author of numerous books, including The Decline and Fall of the British Aristocracy, Class in Britain, Ornamentalism, Mellon, The Undivided Past and has just completed a biography of King George V. Cannadine is a Trustee of the Wolfson Foundation, the Royal Academy, the Library of Birmingham, the Rothschild Archive, the Gladstone Library and the Gordon Brown Archive. He is Vice Chair of the Westminster Abbey Fabric Commission and a Vice President of the Victorian Society. In addition, he is Editor of the Oxford Dictionary of National Biography, sits on the Editorial Board of Past & Present and is a member of the Royal Mint Advisory Committee and the Editorial Board of the History of Parliament.

Author and editor of as many as sixteen books, David Armitage is a prize-winning writer and teacher and is the Lloyd C. Blankfein Professor of History at Harvard University. Some of his previous books are Ideological Origins of the British Empire, The Declaration of Independence: A Global History, The History Manifesto and his new work is titled, Civil Wars: A History in Ideas.


International bestselling author of nine works of narrative history, including Nathaniel’s Nutmeg, Giles Milton makes his debut appearance at the Jaipur Literature Festival this time. His other works include White Gold, Paradise Lost and Russian Roulette, which have been translated into 20 languages. Milton’s has also authored two novels and three books for children and his most recent work was published in 2016, titled The Ministry of Ungentlemanly Warfare.

Richard Fortey is a renowned palaeontologist at the Natural History Museum in London. He is better known to a wider public as the writer of eight books of popular science for which The Royal Society awarded him the Michael Faraday Medal. His most recent book is The Wood for the Trees: The Long View of Nature from a Small Wood, published in May 2016.

James Barr is a visiting fellow at King’s College London and is a significant author on the Middle East. He today runs his own research consultancy and is currently working on a book on the post-war Middle East. His book on Lawrence of Arabia and the Arab Revolt, Setting the Desert on Fire, was published in 2006. A Line in the Sand, on the rivalry between Britain and France for dominance in the Middle East, followed in 2011. He has worked at the British Embassy in Paris and in politics at the Daily Telegraph. The tenth year anniversary edition of the Jaipur Literature Festival will be his first appearance.