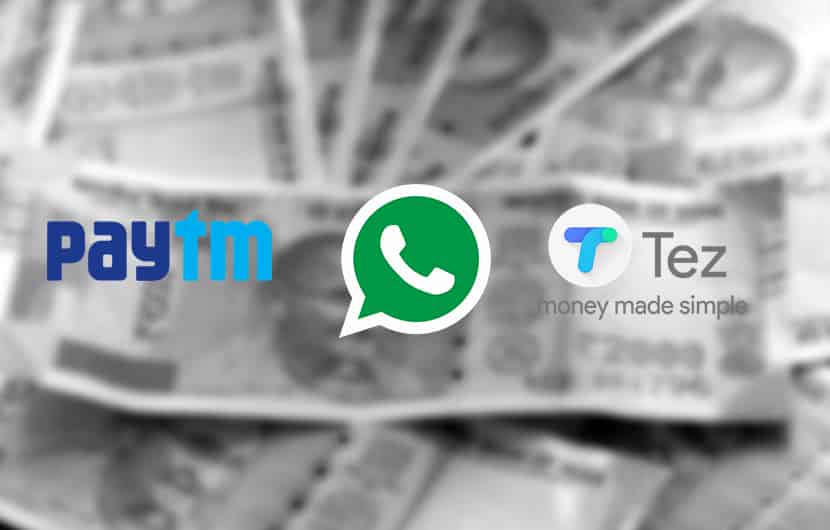 WhatsApp Payments will be in direct competition with the likes of Google Tez and Paytm.

WhatsApp launched its payments service making it more than just a regular messaging platform. The WhatsApp Payments feature uses Unified Payments Interface (UPI) and will be operational on both, iOS and Android in India – one of the first markets to get the service. UPI, which was introduced by National Payments Corporation of India (NPCI) is a payments platform that makes it possible to transfer money directly from the sender’s bank account to the recipient’s. It undoes the requirement of adding money to a wallet or the use of a debit card. WhatsApp Payments will be in direct competition with the likes of Google Tez and Paytm.

WhatsApp Payments can be accessed through ‘Settings’ in the app. Tapping on it takes the user to a verification page wherein the mobile number linked to the users bank account is required – much like that of Google Tez. Once the set-up process is complete, a user can send money by opening a chat window, tapping on the paper clip icon followed up by the payment button. This will lead users to a payment page where the amount to be transferred is to be entered.

Since Paytm and Mobikwik are established players in India and offer multiple services in the e-wallet segment, they are less likely to be affected by WhatsApp Payments, for now. Google Tez on the other hand, who launched in September last year, may face some challenges from WhatsApp being that they are a new payments app in India.


Moreover, Paytm also includes the UPI Payment option on the homepage and in the Inbox. In order to utilise this, users need to integrate their bank account/s in Bhim UPI section first. In addition to transferring cash to friends and family, the platform also enables payments to merchants. Other options Paytm offers are payments by entering the recipient’s Aadhaar number and/or by generating a QR code. None of which are available on WhatsApp Payments as of now.

Google Tez is also a UPI-based payments platform and like WhatsApp, they have tied up with several Indian banks including State Bank of India (SBI), Axis Bank, HDFC Bank ICICI and more – that support UPI. The app is more of a payment app than a messenger app and allows users to pay their Google contacts and other things like movie tickets, DTH recharge, mobile recharge, online stores and electricity bills through a UPI ID or bank account number with IFSC code. Cash mode in Google Tez is a unique feature that lets a user pair their smart-phone with a nearby Tez user via audio commands to send money to their bank accounts.

So far, payments in WhatsApp is cut off to contacts on the app and can only be used if one has updated and enabled the feature in their app. Whereas Tez lets users send money to anyone with a bank account without the requirement of having the app on their smart-phone.

However, WhatsApp could come out on top in the race to lead the e-wallet or digital payments segment due to sheer numbers. While Google Tez has grown to about 12 million users – as of December 2017 –  WhatsApp is currently the most popular messaging platform with over 200 million monthly active users. Almost anyone with a smart-phone in India uses WhatsApp and this gives WhatsApp Payments an edge over others in the segment. It makes for an easy transfer of cash from within the messaging service app itself without having to download anything additional.

Cancel reply
Aye Finance raises 25 crore from Hinduja Leyland Finance, Intellegrow and more; In further talks for Round C
Elon Musk is Not the Future