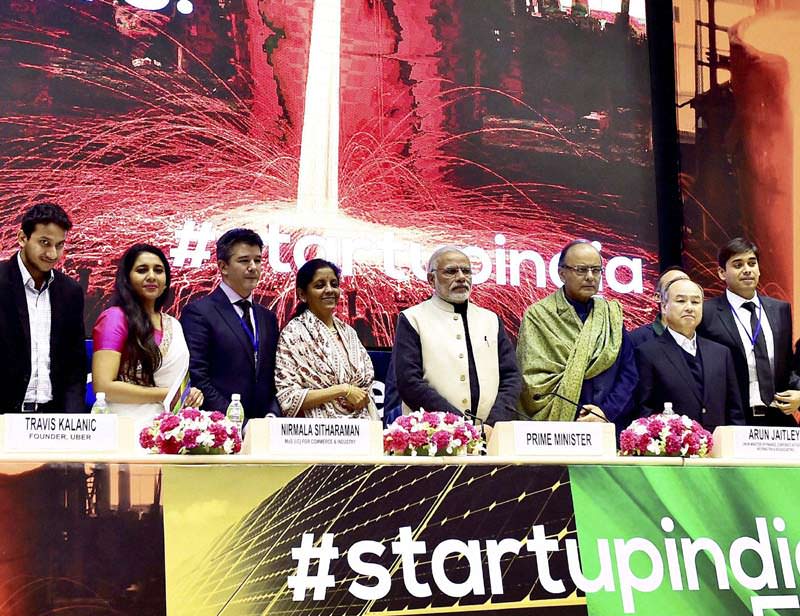 The January 16 announcement to kick start the Startup India campaign has generated a lot of excitement. A lot of passionate and dedicated volunteers and different groups of people have worked tirelessly to make this campaign announcement a successful one.

Prime Minister Modi kept the excitement alive when he announces a number of initiatives to support start-ups in the country. One of the initiatives announced by the PM included a 100 billion rupee fund and a series of tax breaks for start-up companies and their investors.

The event where Modi launched the Startup campaign was attended by scores of investors and entrepreneurs. While everyone present was excited with the announcements, many also recognised that there are many challenges that the country has to overcome.

“Historically we as a country have not invested in infrastructure and skill development. The challenge before us as a company and as an industry is to develop skills and enable people get gainful employment,” said Ola Founder & CEO  Bhavish Aggarwal. Talking on similar lines, Snapdeal Founder Kunal Bahl said, “The biggest challenge most startups face is to get really really high quality team members who will stick it out when times are tough and stay with you when times get better when you need depth in your management.”

While there are many challenges ahead, the start-up campaign is set to boost the industry. Pramod Saxena, Chairman Oxigen Services said, “The start-up India movement is set to boost country’s entrepreneurial spirit. Over the last 8 to 10 years many initiatives have come forward to uplift the start-up culture but with PM Modi’s encouragement, it is a matter of time where we’d be as impactful as Silicon Valley and others. We are in need of private enterprise of that scale that can promote these initiates like Silicon Valley.

The private equity generally rushes in one direction but for the country’s perspective this should be seen differently. The government initiative should be to promote all round entrepreneurial development in support to start-up ventures that comes from different diversified fields which is huge in numbers; especially when we talk about agriculture, food and clean energy. Also, banks are not taking position to support early stage projects hence only areas of interest to VCs/ PVT Equity are seeing growth in startup’s. If government ensures a frictionless access to early stage capital to young entrepreneurs, we will see many more startups in areas of priority for country’s overall development.

In the payment sector we have seen a lot of development and government support. There are lot of other sectors which are open and need entrepreneurial and equity support.”

The campaign is set to help not just the entrepreneurs but also the investors, Talking about this, Apoorv Ranjan Sharma, Co-founder of Venture Catalysts said, “It gives us great pleasure in launching our Mumbai facility in conjunction with the Government’s initiative to give the necessary thrust to India’s Start Up ecosystem. We have built an extensive angel network by involving the country’s high net-worth individuals, and a unique, innovation-driven platform to offer the most comprehensive single-point start-up solutions for upcoming ventures. Moreover, VCats has also tied up with several prominent global start-up facilitators, such as Plug and Play, to expose the Indian start-ups to strategic opportunities from across the globe, and connect with potential partners, investors and mentors from around the world. This puts us in a good position to empower start-ups in India and propel them to register a global impact.”

India is in the cusp of a digital and start-up revolution. Sanjay Krishna Goyal, CEO & Founder ACL Mobile “India is up for a startup revolution; with 3100 startups in 2014 the reports project the numbers to reach 11,500 by 2020. Tapping into this entrepreneurial gold mine gives form to innovation that can boost India’s economic prospects by creating jobs and wealth. The last decade has seen a boost in entrepreneurial activity because of significant amount of funding activities. But obstacles like costs, procedural complexities and delays still remain at large.

The new initiative focusing on startups is a welcome move. The government needs to create a favorable environment for small-ticket co-investments which can help early-stage entrepreneurs; consider matching investments for seed investments by central funding agencies. The government initiatives should focus on building a start up culture in the country by promoting all round entrepreneurial development and subsequently creating an eco-system for conducive growth of the startups. The movement must aim at reducing cost. This can be done by defining a startup, easing regulations and the procedures around the company registration process, and possibly exempting startups from direct and indirect taxes, at least in their initial years, to reduce cash outflows.”

Ambika Sharma, Founder, Instappy said, “Startup ecosystem is at a low with the numerous layoffs and unplanned hiring. Stability and long term planning will be a focus area for startups in 2016. The ecosystem will need to realign talent and work on attracting new talent. Support systems for startups and incubation will increase, average valuations seem set to increase but funding will be far more cautious then in the past year. Product based startups will show growth as will Logistics, utility services, lifestyle.

Start ups will have to become more agile and nimbler with a sustainable revenue process.  Government under the make in India and digital India initiatives will fuel growth for Indian startups. So far the Indian economy has witnessed phenomenal growth for the Indian technology startup ecosystem, driven by factors such as massive infused capital, acquisitions and consolidations, increasing Internet and smartphone penetration, and an ever growing domestic market will continue to infuse energy. B2B startups will show strength and numbers will increase in the coming year.”

The government has put this thrust in the start-up sector not only because the industry is creating employment and improving the economy, it is also filling many gaps in the Indian market and creating an environment where many problems that the country is facing is getting solved.

Soumitra Gupta, Founder & CEO, Togofogo said, “Togofogo.com as a startup shall play a leading role in environmental cleanup and help recycling old phones into re-use again and also participate in lower imports by extending the life and use of an already imported phone in India.”

Sandeep Aggarwal, Founder and CEO of Droom talking about the campaign said “PM has inspired the nation today with the launch of the Startup India Standup India mission. His Vision and roadmap synergises with the economic necessities. His keywords business impact, affordable Excellence, innovation, self certification compliance, job creation assure us of sustainable nation building . A new major move is the startup exit policy. An 80%rebate on patent filing and a whopping fund of 10,000 Cr to startups is highly motivating. India needs same magnitude of efforts that created industrial revolution in 1740 and today’s announcement paves way for that”.

The campaign has paved a very successful path for the start-up industry and has inspired a lot of entrepreneurs to continue their hard work and strive to achieve excellence. Manavjeet Singh, Founder and CEO, Rubique.com said “The passionate, energetic & straight from heart talk in the Startup India event on January 16, indeed created a lot of positivity and vibrancy in the Indian entrepreneurial clan. The cherry on the top was the Startup action plan declared by Modi. The government has hit the nail when it comes to dilemma an entrepreneur faces to execute an idea. Set up of incubation centers, guidance on compliance at no fees or funds of fund is definitely going to boost spirits of budding entrepreneurs to take the plunge in the market to make their dream a reality. Making the registration a simple process through an app & portal along with the reduction of 80% fees will make first few steps much smoother than what it was. The tax exemption for 3 years & exemption on capital gains is definitely will help us focus more on the strengthening our foundations rather than worrying about the tax outflow. Lastly, in the dynamic market scenario like today where it takes few days to replicate an idea, the decision to guide & make the patent process faster is definitely going to be game changer not just in India but worldwide”.