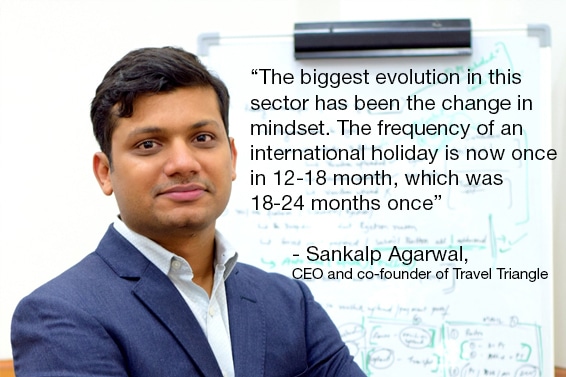 The rising aspirational middle class, the huge smartphone user base and increasing internet penetration have all contributed massively to the revolution of India’s travel & tourism Industry in the last few years. Thanks to technology, one can now actually plan a trip from among various options present at their fingertips.

The market has also responded brilliantly with innovative trends and technologies giving the industry a whole new dimension, says Sankalp Agarwal, the CEO and co-founder of TravelTriangle.com.

“What started off as booking online tickets on the IRCTC website a few years ago, has now led to travellers booking entire holiday packages worth lakhs online. The Indian online travel penetration is projected to reach 46%, up from 35% in 2012.”

“The earlier trend of a big annual holiday is now getting replaced with a big annual holiday and multiple weekend getaways interspersed throughout the year. What started off as group tours with fixed itineraries is slowly getting swapped with customised holidays,” adds Agarwal.

The company has already been five years in the travel and tourism sector and bets that the technology penetration would push this sector to be the fastest-growing distribution channel with gross travel bookings on mobile estimated to grow rapidly in the coming years.

Launched in 2011 by a 3-member team comprising IIT grads – Sankalp Agarwal, Sanchit Garg and Prabhat Gupta, TravelTriangle was formed to simplify the complexities of travel planning.

The need for such a platform arose when the founders were visiting Leh on a trip. Another group which had booked a similar package with a local travel agent got a more cost-effective price, whereas they had to shell out much more in comparison. This incident led them to find the massive business opportunity existing in collaborating with the localised travel agent market. Leaving their high-profile corporate jobs with the likes of Adobe, Yahoo & Oracle, the trio set up TravelTriangle.

At a time when startups are seeing a massive dip in their valuation and are focused more on retaining their customers instead, TravelTriangle.com believes that in the long run, it’s the CMNM (Contribution Margin Net Marketing) numbers that will make a better metrics to monitor business growth.

TravelTriangle.com has not only crossed the GMV-benchmark of a couple of hundred crores but has also been rated 95.09% Positive by the travellers which are among the highest benchmark in the market.

“We have achieved operational profitability in 6 of the key geographies we operate in – including Sri Lanka, Himachal, Sikkim, Gangtok, Darjeeling and Kashmir. These destinations are already giving us profit margins and will ensure that our contribution margin becomes positive for 80% of our destinations – a feat which looks clearly possible in our roadmap to future.”

It has served over 8 lakh travellers and currently has a bouquet of 650+ holiday planners from across the globe. The company claims to attract around 15 lakh visitors on their website every month.

Agarwal believes that the company’s facility of offering multiple quotes to customers, which helps them to customise and personalise their holiday, is what separates them from the other players, who only offer holiday packages.

“The traveller receives multiple quotes for their vacation from travel specialists based on the travellers’ specific requirements. A traveller can compare and get the best deal. We specialise in customised trips, instead of following a one-size-fits-all approach.”

“We offer value prices, convenient payment solutions such as EMIs and COD and 100% ‘Money Safe Guarantee’ to our users,” added Agarwal.

It is predicted that by the year 2018, India will have nearly 30 million outbound tourists. The number of people travelling abroad has been on an increasing trend of about 10.7 percent in the past five years.

“The holiday and VFR trip travellers are now also opting for niche tours like sports tourism, luxury travels, MICE, honeymoon packages and cruises. The latest trend has been to explore new countries and individual/small group trips instead of large group tours.”

With industry players predicting a cheaper dollar that would boost the industry further, the segment is happily growing. Countries like Seychelles, Maldives, Vietnam, Finland, Turkey, Cyprus, and Argentina are the newer locations which Indians have started exploring off-late.

“Indonesia, Thailand, Hong Kong, Bhutan and Sri Lanka and other short-haul visa-free destinations are on must visit list for Indians when looking for a quick short weekend trip of 3-4 days. The frequency of an international holiday is now once in 12-18 month, which was 18-24 months once.”

TravelTriangle.com has raised Series A investment of $1.7 million from SAIF Partners. In April 2015, Silicon Valley venture fund Bessemer Venture Partners also led an $8-million second financing round in the company.

“Our monetization model is built upon solving the travel agent’s problem- solution and matching it up with Travellers problem-solution. We don’t charge from traveller as of now, we earn from our partners- the travel agents.Our intuitive recommendation engine drives most appropriate data about the customer and since we are able to bridge this knowledge of travellers need with Travel agents offering, we see a huge traction towards our model,” said Agarwal.

Being in a category that is season dependent, summers see a jump in numbers followed with a lull period.

“We are a startup so we are only a part of the larger whole: hence we are privileged to show growth month on month as on date. Like other industries, the category also operates in similar fashion, however, the problems are immense, and as a tech company, we solve the problem for each stakeholder and that’s been our USP.”