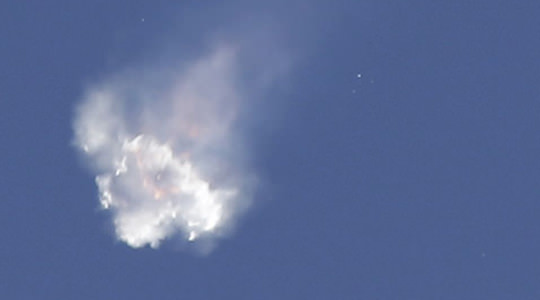 SpaceX is going through a tragic time after yesterday’s disaster regarding the Falcon 9’s launch. The rocket broke up in a fiery blast on Sunday, just mere minutes after its launch with a robotic Dragon cargo capsule. Its course was set to the International Space Station. In the last eight months, this was the third failure in the space station resupply mission.

“We appear to have had a launch vehicle failure,” NASA spokesman George Diller observed. Air Force officials stated that the rocket developed an anomaly roughly two minutes into the flight. Ground spectators and possible crew were spared from the debris as it fell into the Atlantic Ocean without any damage caused to property.

For SpaceX founder Elon Musk, Sunday happened to be an unfortunate birthday. The billionaire turned 44 years old on Sunday and reported in a tweet that “there was an overpressure event in the upper-stage liquid oxygen tank.”

SpaceX’s president and chief operating officer, Gwynne Shotwell, echoed that preliminary assessment during a news briefing later Sunday — but she said it was too early to say anything else about the cause of the mishap. SpaceX is in charge of the investigation, under the oversight of the Federal Aviation Administration. Shotwell said SpaceX crews were trying to recover debris from the sea.

This can become a harsh turnover for the astronauts living in the ISS. Sunday’s Falcon 9 launch was the first cargo delivery since the total loss of a robotic Russian Progress capsule in late April. The Dragon capsule accompanying the rocket had food supplies, oxygen and other basic necessities. For the crew up there, the pressure is bound to build.

Another Progress ship is scheduled to be sent to the station from Russia’s Baikonur Cosmodrome in Kazakhstan on July 3, and a robotic Japanese HTV transport ship is due to follow in August. Suffredini said the station’s residents currently have enough food and other supplies to see them through October. If the stockpile dwindles to a 45-day supply, he said NASA and its partners would have to consider bringing the crew back to Earth, he said.