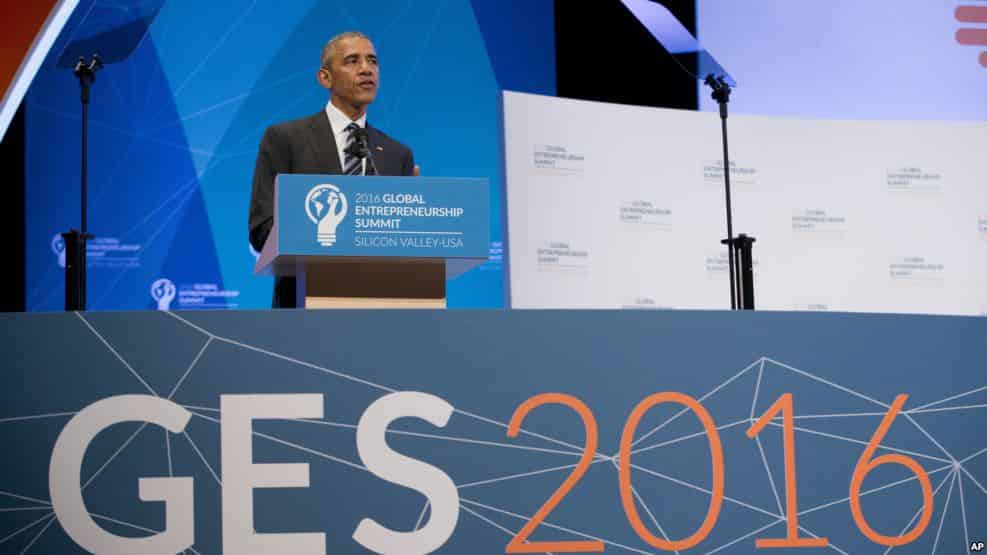 “The world has shrunk. It is interconnected. It promises to bring extraordinary benefit, but it has challenges and can sometimes evoke fears,” said Barrack Obama at the Global Entrepreneurship Summit at Stanford University here. He was sharing the stage with Mark Zuckerberg and Sundar Pichai in Silicon Valley.

India will be hosting the Global Entrepreneurship Summit next year the latest infatuation of Silicon Valley noted USA Today.

The US president further added, “Entrepreneurship remains the engine of growth. It is hard but essential in an increasingly globalised world.”

This was Obama’s second trip to Stanford in a year. The focus of the summit was on budding entrepreneurs that highlighted celebrities (the cast of Silicon Valley), tech royalty (the heads of Google and Facebook) and politics (Commerce Secretary Penny Prtizker).

Obama briefly touched on the importance for tech companies to offer annual progress reports on their hires. He moderated a panel with Mark Zuckerberg and a trio of young entrepreneurs from around the world.


Zuckerberg stressed how limited access to the internet has been a huge obstacle for in the pathway of the world’s progress and feeding entrepreneurship is making the Internet available to the 4 billion people who don’t have it.

“Personally, the biggest thing I’m concentrating on is connectivity. For most folks, this is a blocking factor. Without access to the Internet, it is hard to imagine what you are missing out on,” said Zuckerberg.

The Internet is arguably the greatest economic engine of all time and technology has been a prime mover in the US economy. It has earned greater attention from government regulators and policy makers, stressed Google CEO Sundar Pichai in his brief keynote.

Taking a leaf from Pichai AOL co-founder, Steve Case, further took the discussion. He stated, “Silicon Valley rose from orchards more than 40 years ago to the epicentre of innovation today.”

Trump’s anti-immigration policy and his comments about minority groups have even led progressive tech leaders to distance themselves.

Dilawar Syed, president of Freshdesk, who was a conference participant, said, “Obama’s presence demonstrates our enduring commitment to entrepreneurs who are building their communities against all odds.”