As the mercury soars up with unbearable humidity, summer ailments get active among all ages of people starting from toddlers to octogenarians. It is quite a vulnerable time for adults as well children as the sweltering heat might get them down with diseases like viral fever, migraine, gastroenteritis, heat-stroke and dehydrations with electrolytic imbalance and cough.

Children are undoubtedly in danger the most for their immune system is developing at this stage. Schools have already preponed the classes in many cities to end the school early to escape the peak time of the heat.

Viral fever is very difficult to control or prevent. Though nothing serious, it keeps the children down for some days. The best way to combat is through good and healthy diet. Children have this habit of playing in the sun, then sweat and drink cold water immediately. Another problem is viral hepatitis. So, if the child is complaining about lack of hunger and stomachache and the problem persists for 3 to 4 days, the parents need to consult the doctor.

Extreme exposure to heat might give rise to migraine problems in people. Being a neurovascular problem hot temperature is a provocative factor in it. People should also be careful before consuming hot food, spicy food, Chinese food as it has ajinomoto containing monosodium glutamate that leads to the arteries in the brain to dilate causing headache. During This intense temperature, the public transports like a congested bus or train could also lead to migraine pain.

People who are exposed to longer hours under the sun might face problems like heat cramps, heat edema, heat tetany, heat syncope, heat exhaustion, heat stroke and many more.

The heat cramps generally takes place in the muscles after exercise as sweating causes the body to lose water, salt, and minerals. Having high electrolyte powders added to the daily beverages or water will deal with the problem.

For the more aged ones who are exceeding 60, the common problems to face are heat syncope, heat exhaustion and the most common, the heat stroke. It is the fainting that occurs from low blood pressure when heat causes the blood vessels to expand to dilate and the body fluids move into the legs because of gravity.

People should try to prevent themselves from staying under the sun for long hours. The heat exhaustion or the heat prostration generally develops when a person is working or exercising in hot weather and does not drink enough liquids to replace those lost fluids. It happens generally to school going children and the aged labors who we generally see pulling carts and all. 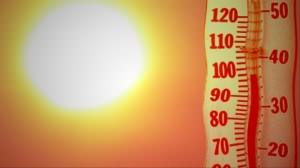 The heat stroke or the sunstroke occurs when the body fails to regulate its own temperature and body temperature continues to rise, often to 105 °F (40.6 °C) or higher. Even with immediate treatment, it can be life-threatening or cause serious long-term problems. We have all seen heat stroke causing death many a time.

Experts say controlling food consumption could help our heath to a long way. It is advised that one should try to keep oneself hydrated and consume high protein food that helps us to continue to work throughout the day. It is recommended to avoid foods that flush the water out of the body.

Those kinds of drinks include coffee, tea, soda, and fruits like mangoes, fennel, artichokes and asparagus. Consuming them when out of the house might create problems. Vegetables are obvious choices as they contain lots of fluid. It is wise to avoid boiling or steaming them for too long, as this depletes them of their water and nutrient content.

It is good to stick to lighter carbohydrates, like fruit, which require less energy and produce a lot less heat by thermo genesis. Drinking juice, lassi as much as possible is good. Curd, fresh fruits (full, not the ones that are cut and sold at the streets) house made foods are very good for the body in this heat.

Interestingly, consuming a hot drink does add heat to your body, but that heat actually increases the rate at which you sweat, which can help cool you off. The scientists who conducted the study believe that thermo sensors lining the throat and mouth might be what trigger the sweating response.

Of course, the sweat has to evaporate in order for you to feel cooler, so if you are wearing heavy clothing or live in a very humid climate, drinking a hot beverage won’t help much. But on a hot, dry day when you’re wearing shorts and a t-shirt, hot coffee might actually cool you off more than a glass of ice-cold coffee.