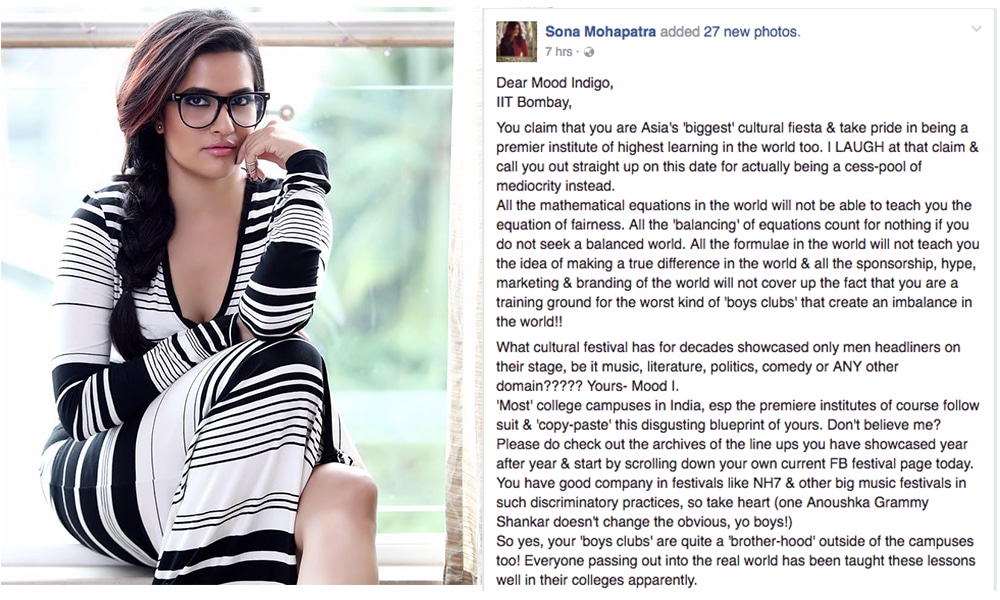 Sona Mohapatra slamming IIT Mumbai publically over a business deal negotiation going sour is going viral. In a post on Facebook, Sona Mohapatra has declared IIT Bombay cultural festival Mood Indigo sexist. She goes on blaming IIT Bombay as an educational institute, questioning the thinking of its students and the ability of the institution to impart knowledge.

This is not the first time, it’s rapidly becoming a trend when someone posts something on Facebook and the online media hungry for viral headless stuff laps onto it and starts promoting it. Responsible, respectable publications have their online news portal, social media pages buzzing of the so-called viral stuff starting from sex, sleaze, hot pictures of actresses and sometimes actors, gossip, tabloid material, one individual attacking another, pseudo-feminism and more.

We can’t blame the media as the consumer is such. It’s simple demand and supply.

I am prompted to share my view because of the very fact that these respectable publications decided to flash this irresponsible action by an artist taken maybe in anger as news.

Sona Mohapatra maybe a brilliant artist but every other time making private conversations or business negotiations public to gain publicity is definitely in bad taste. It seems to have become fashionable to shoot in the air over this evolving scarecrow feminist shoulders.

Many college festivals in India represent corruption, and these are the same kids who define our future and always looking at kickbacks on various aspects from Artist booking, arrangements, event planning, etc.

So I have no love for any of them including IIT Mumbai.

But leaving this extracurricular activity of festival planning aside, these are premier institutes. These are institutes which have kids mainly coming in on merit. They are not there because of their Gender. So Before Sona Mahapatra starts attacking an institute like IIT, she should think?


India today is an angry nation, and it has become fashionable to go online on Social Media and try to destroy reputations in anger. Anyone says whatever they want with impunity and gets away. The moment there are talks of regulating online media there is an uproar.

Where there should be an uproar, remember the virtual world like the real world comprises of all type of anti-social elements and big mouths.

If you have the time read her full post –

(PS Have added on some screen shots of how their festival page of FB posts looks like this year, so please judge for yourself. Wouldn’t be any different if we scrolled down decades if FB existed. Those taking umbrage from the institute & calling me names or quoting the 1/2 odd women like Asha Bhosle who’ve graced their stages, go learn a lesson or two about statistics & also brush up your analytical skills. You don’t scare me. I know my numbers & operate on facts, not feelings!! )