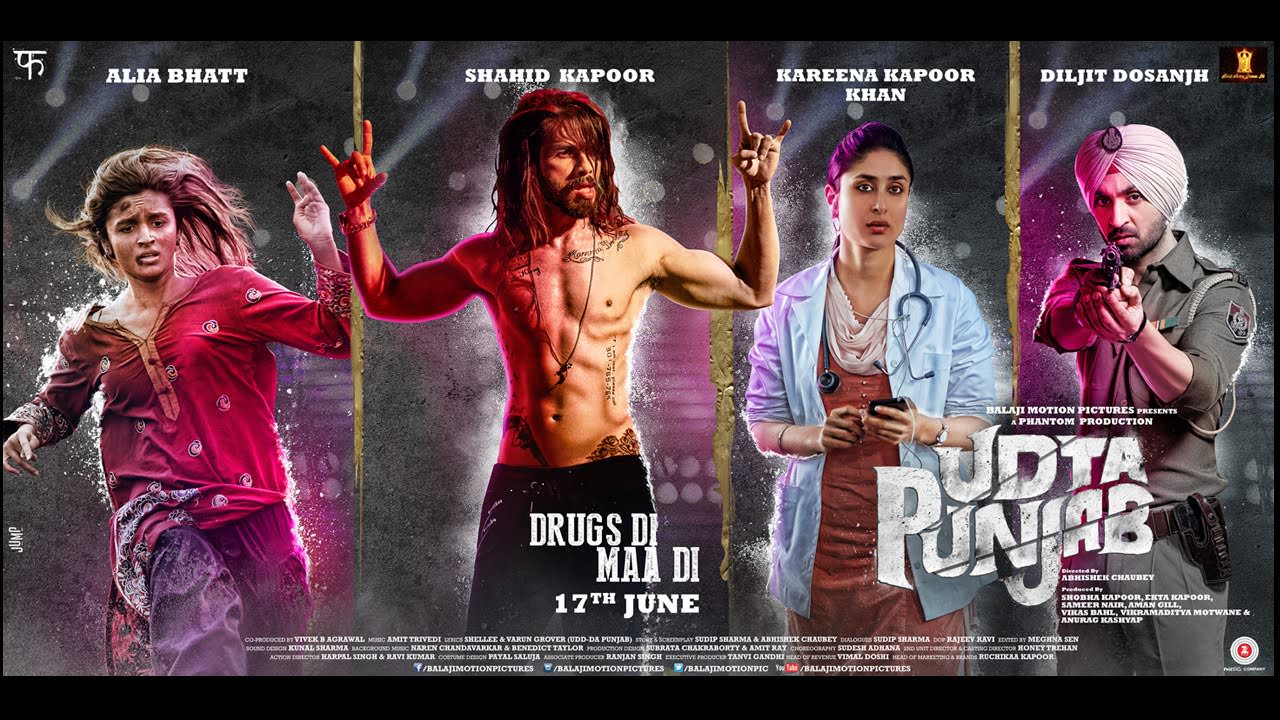 There is a moment in Udta Punjab, a moment so casually composed that it is quite easy to miss it, when a wizened up, elderly character mouths the line, “Zameen banjar, toh aulad kanjar” (when the land is dry, the children go high).

At the end of the day, this line explains in brevity what might lie at the heart of Punjab’s current malaise. Udta Punjab is a story about drugs; it is a story about a generation caught in a seemingly irrecoverable cycle of heady highs and horrible lows. And it is also, and very importantly, a story about how a state has failed its agricultural community and its youth.

And yet, in spite of its grave and controversial content, Udta Punjab mostly manages to tread the fine line between pacy entertainment and serious drama. The characters are introduced at the very onset of the film but it is the opening dialogue scene, a night time scene with rolling crop fields and some across- the-border (Pakistan) drug smuggling that sets the tone for the entirety of the movie. To say anything more about it would be to compromise it for those yet to experience it. But yes, here is one of the best opening scenes in Bollywood in recent times and carries with it the quirk and caustic humour that is trademark Abhishek Chaubey.

Speaking of performances, Shahid Kapoor embraces Tommy Singh with enthusiasm and dedication. He is an actor who has been relentlessly working on himself and in the hands of directors such as Vishal Bhardwaj and Abhishek Chaubey, he truly flowers and brings a chameleon like quality to his roles.  Shahid Kapoor brings into Tommy Singh a naïveté and madness that makes the audience pity him and root for him even at his dingiest of lows. Here is a rockstar caught in the nexus, a person who inadvertently pushes the youth to addiction but who is himself caught in the spidery web of drugs. Yet, even as he spews expletives, digs his face into cocaine or mouths drug inspired, ridiculous lyrics, he manages to retain the vulnerability and simple mindedness that was so necessary for the role.

Kareena Kapoor as Dr Preet, an anti-drug crusader and medical practitioner, brings to the film the much needed rootedness. She is convincing and even impactful when serious but tends to slip into Jab We Met’s Geet mode when excited. Still, it is refreshing to see her play a different character than what we are used to seeing and she does a commendable job. And Diljit Dosanjh? As Assistant Inspector Sartaj Singh who has a change of heart about the drug problem, Dosanjh is an absolute delight. A subtle actor who can completely disappear into a role, Dosanjh is endearing and definitely marked for bigger things. Whether when he is pleading with the doctors to save a family member or when he sardonically calls Punjab’s drug problem the next, “Green Revolution” Dosanjh manages to shine and, in some moments, lead the performance.

But it is Alia who takes the cake performance wise. As a young Bihari migrant with state level hockey dreams, it is she who becomes the axis around which the film starts rotating, even when it has no connection to her. She is the outsider. She is the victim. She is the mirror to Punjab’s deep rooted malaise. Her story arc is heart wrenching but it is Alia Bhatt, the young actor, who outshines everybody with her grit, her cut throat optimism (if there ever were a phrase) and her defiant hope for “good times” that her character so ardently roots for. A round of applause for the young actor who surprises and surpasses every single time.

Satish Kaushik, Prabhjyot Singh and the actor who plays Tommy’s cousin, all deserve an honourable mention.

Rajiv Ravi’s cinematography excites- sometimes focusing on the dreary factory silhouettes and sometimes on the stretching paddy fields, he brings a vibe of pregnant anticipation to the scenes. Amit Trivedi’s music continues to please the senses and sets the tone for the film, it goes from chest thumping highs to dizzy lows.

As a film Udta Punjab is not Chaubey’s best work, the writer would rate Dedh Ishqiya (with its crafty nuances and smooth storytelling) above it any day.  The movie also slips into preachy mode- especially through a voice over by Kareena Kapoor- every now and then. The film hits a few speedbumps and slackens in the second half when the story takes center stage over the characters. It is a film with a few flaws that audiences will not miss.

But it is a special film, nevertheless. There is love and conviction in the film and that is evident. But what is most important is that it is a story that long needed to be told. The very fact that the CBFC argued that the film glorifies drugs raises a few pertinent questions that is best left for another conversation. For this is a film that does the opposite; it desires to show, in whatever manner possible, what lies at the heart of the drug problem. How a nexus is not built in a day and how searching for one super villain in this context is but futile. It’s a system that is in place, so what can the common man do? Especially when the common man is blanked out with a syringe stuck in his arm. Definitely a film that will stay in your head for a while.

But at the end of the day, a film is a film. It must entertain and Udta Punjab certainly does so by giving us a heady cocktail of moments, scenes and performances. Or more appropriately- soaring highs in the first half and rehab in the second.