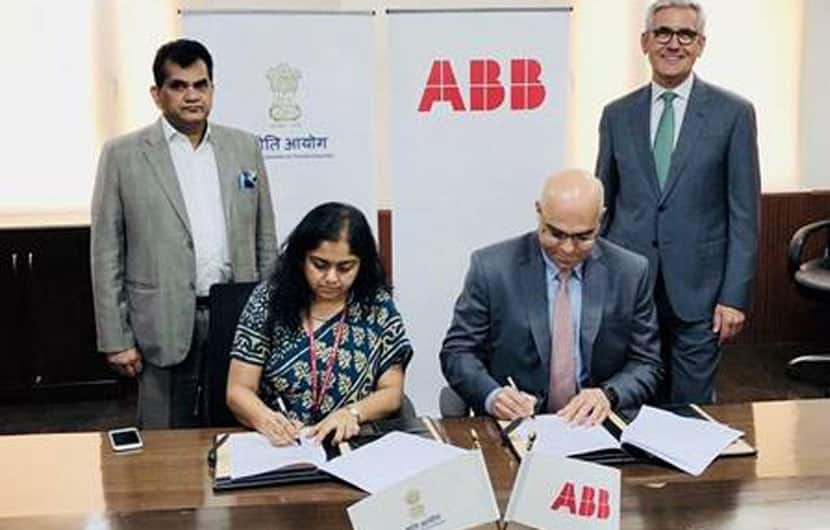 Both parties intend to support the government’s Make in India programme with advanced manufacturing technologies and have signed a statement of intent for the same.

Both parties intend to support the government’s Make in India programme with advanced manufacturing technologies and have signed a statement of intent for the same.

In addition, ABB also added that Niti Aaayog will be working alongside them to initiate key sectors of the economy in digitisation, Internet of Things and artificial intelligence. The sectors that they are looking to start with include power, water utilities, food, heavy industries, transport (rail and metro) and infrastructure.


Reportedly, ABB also added that their partnership will focus on the electric mobility segment. The two parties will work with government ministries, solicit feedback on critical areas and discuss solutions to industrial automation and digitisation.

Amitabh Kant, Chief Executive of Niti Aayog, said, “This collaboration, which will include cross-sectional understanding of digitisation at ABB’s centres, will be key in driving progress of key sectors in India. This is meant to lead to actionable insights and focused plans that will help India become a centre of advanced manufacturing.”

He also said that Niti Aayog will facilitate policymakers and government functionaries’ participation in workshops and training programmes organised by ABB India. The aim of these programmes, which includes subject-matter experts, is to sensitise policymakers and government officials towards AI capabilities and explore ways for revolutionising manufacturing productivity.

The collaboration’s first workshop will be held in June and at the ABB Ability Innovation Center in Bengaluru. The focus of the workshop will be on the food processing sector while the following events will focus on others like transport, power and urban development.

Niti Aayog had earlier announced steps to tap technology for things like healthcare, predictive analytics among others.