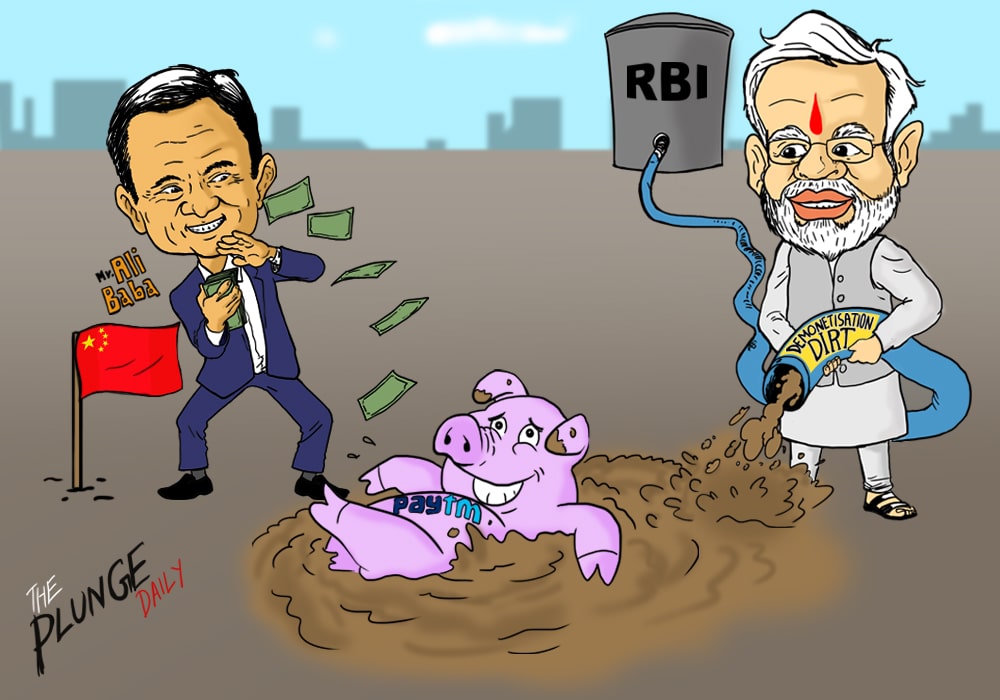 The government seems to have taken the role of the brand ambassador of a Chinese owned company Paytm. In a democracy, it is astonishing to see how people are being forced to adopt financial products from a private corporation. This while the government restricts people to access their money in the bank. Why should we be told how much money we can access? If a person doesn’t trust the banking system and wish to keep his or her money at home and declare it in the annual return will the individual be deemed as a black money hoarder?

Paytm is like that pig rolling in mud and having a blast with Government, Official and Proxy Spokespeople of BJP acting as their brand ambassadors. Where the other mobile wallets like Mobikwik, Airtel Money, Freecharge, Oxigen are waiting in the queue. Not to forget SBI’s Buddy, ICICI Bank’s Pockets, HDFC’s Chillr and most importantly Goverment owned RBI’s Unified Payments Interface (UPI) which should have emerged as a hero. But then it’s the same story of BSNL and MTNL made to sit on the benches while the private operators bake and eat the telecom cake.


A dangerous trend is emerging and apparently, suggests where from the next Manchurian candidate might rise.

With this love for a Chinese owned company Paytm, is the government ready to guarantee and safeguard any possible future repercussions? If not why should a tea stall, a vegetable seller, a grocer pushed to adopt Chinese owned Paytm and in the process the customers too?

Many speeches of PM Modi talks about Indian surpassing China. Where manufacturing continues to be a dream if we operate like this soon, even the services sector will be Chinese owned? Why has the PR Campaign StartUP India StandUp India taken a back seat?

On the other hand, RBI is facing public criticism. Ever since rightly or wrongly allegations hit Mr. Urjit Patel of close proximities with large private companies. The governor is nowhere to be seen.


Is he going to be the fall guy of this hasty, unplanned move of Demonetisation? The governor needs to come out and update the status of the currency availability? How many notes have been printed and how many will be printed and by when? Forcing people to put their money in the bank and not allowing them to withdraw is clearly a case of ‘Government Dadagiri’. This while the mighty and the high rollers ensure their Money is Back in Black!

Any Opposition is a Black Money Hoarder Talking

With RBI Governor absconding things are getting murkier. Was this only a political move, or it had any logic? Carpet Bomb, the city, to cure 2 Zombies? Is this a near similar insider trading issue, where the big wigs were tipped off? A Congress MP Sushmita Dev, in a conversation on NDTV, raised questions over Adani over invoicing?

Are these issues to be ignored as they come from the opposition who are all termed corrupt and black money hoarders by the custodian of democracy Prime Minister Modi? PM Modi and the government should remember that 69% of the people didn’t vote for BJP in 2014? Are they all black money hoarders?

Maybe the PM Narendra Modi Mobile APP hailed by the troll force online should run a survey with some real questions or how about placing a Paytm mobile advertisement?