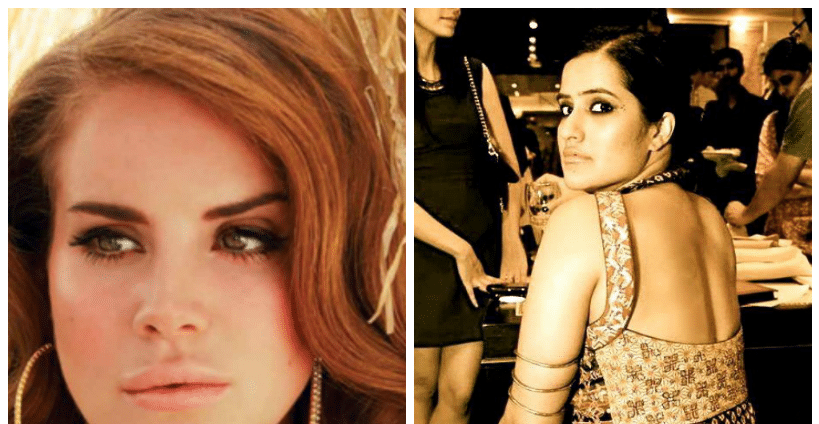 While we have our own pop-stars here in India to stalk and lavish our love upon, have you never wondered how it would be if we had our own version of Britney or Justin Bieber, or do we now? Take a look at these pop-stars below who have uncanny resemblances to their international counterparts, in one way or the other.

Whenever Lana leans back sighs heavily and breathes “Kiss me before you go” we see Sona, guitar straddled on saree singing “Bedardi Raja”. Then there is the matter of those kohl-riddled eyes and black flowing tresses which both of these seductresses sport.

Akon on the left, crooner Himesh Reshammiya on the right.

Firstly, there are the literal ones who will blame it on the *cough-nasal pitched-cough* of their respective voices while singing. But we feel there is something deeper that explains this soulmate-y connection. Remember the songs Himesh and Akon are often associated with? The eponymous “Lonely” number from Akon’s coterie that struck a chord with plenty teenaged souls only to be matched with “Lonely Song” that his counterpart here came up with.

Usha Uthup on the left, Dolly Parton on the right.

Yep, they both still got it. Dolly Parton (who has joie de vivre enough to be a part of huge indie festivals such as Glastonbury this year) and Usha Uthup who still breathes magic into any song with her signature voice, whether it be the luxurious rumble in “Aami Shotti Bolchi” or her iconic “Darrling” making her voice an urban legend.

Anoushka Shankar (on top), Rihanna on the bottom.

The curly tresses and the feline sharp eyes that both these girls sport, a gaze to make you weak in the knees, is something they share as well. Move over Shakira, it would certainly be an eyeful to see Rihanna and Anoushka in the same frame.

Ke$ha on the left, Monica Dogra on the right.

Both have received more popularity for their risqué sex appeal than accolades for their music, which however is popular enough in its own right. Ask 10 year old girls what they think of Ke$ha. Ask Glastonbury why Shaiir and Func are performing there this time. (Because they deserve to, that’s why.)

One Direction boy band’s Zayn Malik on the left, Sunidhi Chauhan on the right.

Ever since Sunidhi went and got her new pixie cut we have been wondering whom she resembles. And then it hit us. Hard. We suggest you take a good, hard look at that One Direction boy Zayn Malik. Then rub your eyes and take a look at post-pixie Sunidhi. Zain-Sunidhi, Sunidhi-Zain. Till it hits you like it hit us. Wham. (Can be repeated multiple times without fear of amusement levels dropping.)

Yo Yo Honey Singh (on top), Kanye West (bottom).

Kanye – Yo Yo Honey Singh

Both brood and swear with delight. Both wear their dark, nonchalant, casual misogyny close to their sleeves. Both churn out foot-tapping music that is (dammit!) undeniably catchy and infectious.

Now both have come a long way when in their respective music industries. Both will grit their teeth and grin at you, and then it becomes difficult to argue going forward. Both have the bulldog charm and the rough and tumble attitude to go with their looks.

Lucky Ali on left, U2 frontman Bono on the right.

Lucky Ali on left, U2 frontman Bono on the right.

Both have the deep crooning voices, exceptional jaw-lines, and the looks of demi-gods (if demi-gods indeed do exist and harbour the mentioned good looks that they’re rumoured to sport.) Both have the silver grey stubble and those pools for eyes.