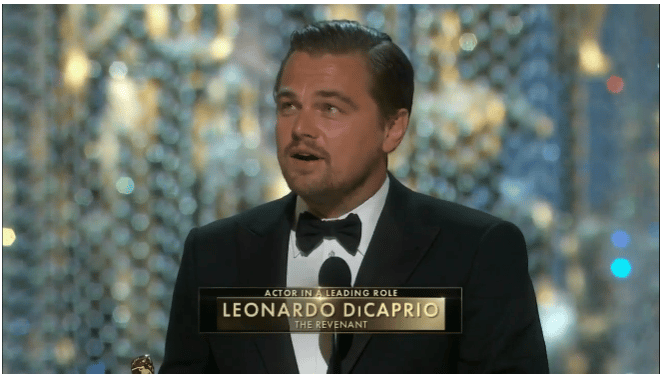 The annual Hollywood glitterati-the Oscars is an occasion full of life and expectation-cut across the world. Glued to your TV sets in the morning, you gaze at some lavishly styled celebrities. The Oscars doesn’t even spare (well, sometimes even the not-so-nice dressed), as acclaimed by camera men, the hosts, and the critics alike.

The 88th edition of the Academy Awards was held today. Even as the moments are being counted, we all waited with abated breath that will Leonardo DiCaprio make it this time? Or to say one time, after being nominated five times earlier?

Leonardo DiCaprio, for all the talent he possesses has a huge fan following not only abroad, but also in India. It wont to be too far-fetched to say that he is the Indian Hollywood star right from his Titanic venture.

And yes!!! Leonardo DiCaprio has been conferred with the ‘Best actor’ for The Revenant

In this edition, ‘The Revenant ’ has been nominated under 12 different categories. Alejandro Gonzalez Inarritu’sThe Revenant is leading the list with 12 nominations, including best picture, best actor for Leonardo DiCaprio and best director for Inarritu. Inarritu won the Best Director’s for The Revenant.

There was a stiff competition from action flicks like Mad Max: Fury Road on one hand and, a space film The Martian. Made at a budget of more than $ 100 million, it was interesting to wait and watch who made the final date with the lady in the arms.