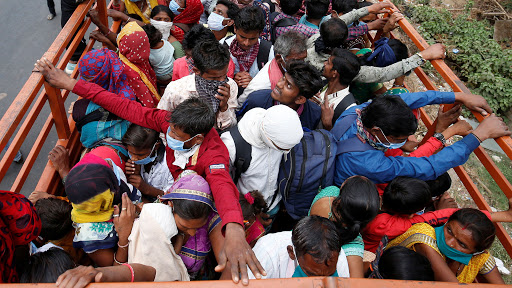 The Center is expected to enrol up to 250 million labourers, in the next couple of years, in the first-of-its-kind portal.

The Center is expected to enroll up to 250 million laborers, in the next couple of years, in the first-of-its-kind portal. It will be linked to various ongoing programmes like Ayushman Bharat and the Garib Kalyan Anna Yojana.

The comes after the plight of laborers and migrant workers came to light when the government declared an abrupt COVID-19 nationwide lockdown. Desperate to return home, hundreds of thousands of laborers set off on foot to walk thousands of kilometers for their village. Recent reports sparked more criticizim when the labor ministry failed to furnish specific data in the Parliament on how many workers lost their jobs and how many died while returning home.

Apurva Chandra, Union Labor Secretary, said workers will be registered directly through their mobile phone. He said the government plans to start the first official survey on migration of the Indian workforce, which will cover both seasonal and long-term migration. Data will be collected through various modes. Chandra pointed out that the portal and survey may help the government better understand migration patterns, and track movements of welfare seekers. “There will be a definite increase in fixed-term employment. Many industries had told us that they are keen to employ people during rush seasons or they wanted students in part-time work during their recess. Now, all these avenues will open,” he said. Bhartruhari Mahtab, labor panel’s head, said its good that the government has accepted their suggestion to register the unorganized sector workers. “If they have set the initial target to enroll 25 crore workers, it means they would primarily target the construction sector as most unorganized and migrant workers belong to that sector,” he said.

The states of Uttar Pradesh and Madhya Pradesh, in a similar initiative, have also launched portals to secure jobs for migrant workers. Madhya Pradesh through its Rozgar Setu portal is looking at providing employment to laborers as per their skills and efficiency. In UP, migrant laborers, as per the state administration, are able to register themselves for employment through mobile applications and portal.

Cancel reply
World experiencing one of the deepest recessions since Great Depression due to COVID-19: WB
COVID-19 has made India’s poor more vulnerable – International Day for the Eradication of Poverty