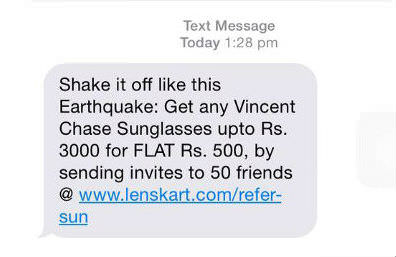 Multiple experts have stated how social media can play a crucial role in promoting your business. However, it can also become a saviour to get out of sticky situations. E-commerce giant Lenskart sent out a callous message today that stated :
“Shake it off this Earthquake: Get any Vincent Chase sunglasses for upto Rs. 3000 for FLAT Rs. 500, by sending invites to 50 friends.”
While the intention was probably not to offend anyone, the brand came under barrage by an angry virtual mob that showed their resentment on Twitter.
Messages like “boycott Lenskart.insensitive sods.pls RT” and “Lenskart should be renamed Swinekart. Whoever did this deserves to be horse-whipped in Durbar Sq” were sent out along with brand’s original message that people received on their mobiles. It was not long before the company realised its mistake and issued sincere apologies. They not only put out an official apology but also tweeted the same message to everyone who werent’t amused with the brand’s marketing move.

This is just another instance that showcases the power and influence social media has on the masses. While Lenskart apology’s is appreciated, the modern Indian consumer may take some time to forget this incident.

Check out our video feature on Lenskart here.

Annual cultural festival of NIT Trichy, Festember 2014
Top 5 Social Media Snowballs Start ups Faced And How They Dealt With Them