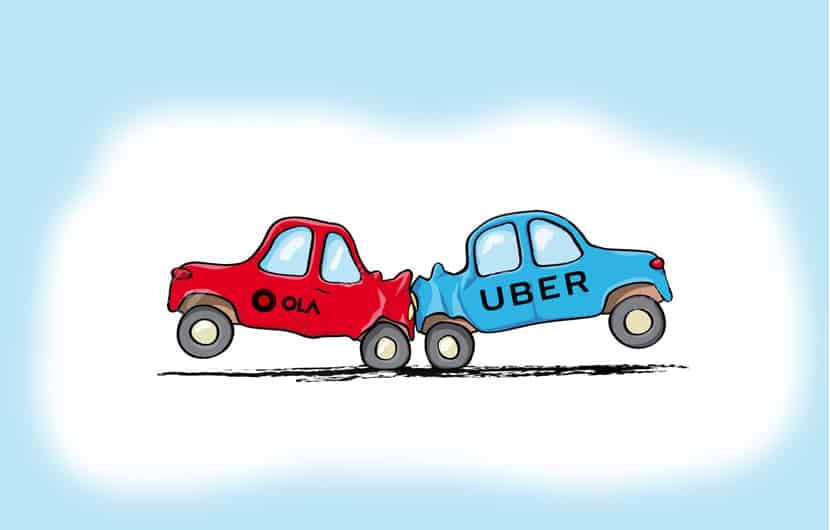 The merger, if it does take place, could create a monopolistic market share

Reports are doing the rounds that cab hailing services Ola and Uber are in talks for a merger being brokered by Japanese investment firm Softbank – who is an investor in both companies. While sources claim that representatives from both companies have met several times over the past few months, none of the companies have confirmed this.

While the word on the street is that homegrown Ola will acquire Uber India, the latter’s CEO, Dara Khoshrowshahi recently said in an interview that India is among their top three markets and accounts for 10 percent of its global trips. He was quoted saying, “We think we’re on a good road there, we just don’t have a specific timeline in mind (for hitting profits). If anything, we’re leaning forward in India.”

While there is no clarity yet on how things will develop, the merger, if it does take place at all, could create a monopolistic market share by an Indian digital company. So far it has been done only by big US technology firms like Google – in search – and Facebook – for social media.

Depending on the final terms and conditions, it would also be pivotal in placing an Indian entrepreneur seen as acquiring one of the most valued startups in the world.

While Softbank is reportedly trying to bridge the two companies, the M&A deal and transactions between Ola and Uber will definitely have its set of issues. Apart from the bitter rivalry, both companies have high stakes involved which could lead to complications. Here are some of the issues that could stall the process:

The most basic issue between the two will be deciding who will be in charge. When Uber sold their operations in China to local rival Didi Chuxing and then in Russia to Yandex and most recently in Southeast Asia to Grab, in all three deals it was the local player who took the reins. However, sources close to Uber have been quoted saying that the company is not considering any deals wherein they do not remain the controlling  shareholder of the joint venture.

Both companies, Ola and Uber, consider themselves as market leaders. While a  few years ago it could have been said that Uber was catching up to the Indian-origin cab-aggregator Ola, once the latter rolled out new services and of Auto and subscription they reclaimed their lead. However, last year Uber claimed that it had matched Ola in terms of cab rides, other than auto. Industry estimates peg that Ola holds 60% of market share while Uber holds the remaining 40%.

While Ola is a more localised product and may hold more market leadership, Uber has operations in several parts across the globe and could inch up market share by increasing the cash spent and expansion into more cities in India.

Another major issue that is not to be overlooked is that of regulations and how the Competition Commission of India (CCI) will look in to the potential merger.

With a combined market share of 90-95% between Ola and Uber, radio taxi players like Meru, who ruled the market earlier, were left in difficult situations.

When Meru had filed for predatory pricing against Ola in Bengaluru alleging that the latter had misused its dominant position and offered heavy discounts to passengers along with incentives to driver partners, the case was dismissed by CCI simply due to the entry of Uber. It cited that the anti-monopoly take did not apply in this case.

India is important to both players

While Ola is an India-based company, for Uber, it is an extremely important market. Despite a year of messy scandals, their founder – Travis Kalanick – being asked to exit and a lawsuit from Google’s parent company Alphabet, Uber managed to stage a turnaround under the new CEO – Dara Khoshrowshahi – when they got Softbank on board as an investor.

While Uber’s global loss was up by about 60% in 2017, their gross revenues also saw an impressive jump to $37 billion in 2017 from $20 billion in the previous year. Aggressive investments in India and other parts of South East Asia was part of the main reasons for both.

During his tour in India, Khoshrowshahi mentioned India as “core” market thus not one that the company would be willing to let go of too easily. In a move to push for mass appeal, Uber has also signed on Indian cricket team captain Virat Kohli as its brand ambassador.

Do Ola and Uber need the complications?

Unlike countries like the US and China, where monopolies have emerged in multiple segments, India manages to function with competition between a mix of global and local players. Currently Ola and Uber are enjoying a duopoly and have a referee that they could bank upon – Softbank.

Sooner or later a new company could emerge and might easily be able to stake 10-20% market share from the single entity that the Ola-Uber merger may create as there are always going to be customers that look for an alternative. Being that cab hailing has such huge potential in terms of sheer numbers in India several players will be willing to take a try even at the entry point.

In addition to the Mahindra Group showing interest in entering the segment,  India’s largest company, Reliance, is also rumoured to be interested in making a foray into the space – however, there is no confirmation on the latter’s.