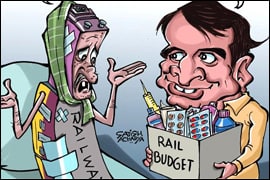 The Rail Budget 2016 has been announced by the Railways Minister Suresh Prabhu recently. The expectation surrounding the upliftment and modernization of the Indian Railways continues to drive the momentum surrounding noise by the passengers and the allied industries.

One huge passenger modernization expectation, which has been doing rounds recently, is the availability of Wi-Fi across stations. The budget doesn’t disappoint at all. Wi-Fi at 100 stations has been announced this year. And the passengers can only expect it to get better with time. Add to it the offering of stations being brought under CCTV surveillance.

The use of internet and technology in Indian Railways, whether on the station or when the train is fast on its tracks is a standard expectation now. It has been many years when the debate over modernization of railways has gained attention in the parliament, and with the passengers alike.

The benefit of being connected using technology is no rocket science. Even, Suresh Prabhu and his team have responded fast on security issues, when an incident was reported on their twitter handle. So, these are just a few pluses for considering Indian Railways going hi-tech.

On the operational infrastructure, the Indian Railways has major plans to deploy latest drone technology and Geo Spatial-based satellite technology. This will help Railways to review the physical progress across major projects-without the hassle of being present remotely. This is on the cards and is expected to be operational in the next fiscal.

There are many more targets to be achieved such as 2,800 km of broad gauge track conversion envisaged and having 100% unmanned crossing by 2020. Administratively, the latest technology will be an excellent tool to monitor the on-site situation carefully.

The Indian Railways is also an important carrier of freight and goods, and it is the scope of reviving the sagging revenue from this source that the satellite technology will be used to monitor the progress on Dedicated Freight Corridor.

The Railways Minister has also declared saving of Rs.8,720 crore from last year’s estimates. The ministry has also estimated a capital expenditure of Rs.1.21 lakh crore, out of which Rs.8.8 lakh crore to be spent on infrastructure in five years. Suresh Prabhu feels this can be achieved effectively through detailed analytics. A Special Unit for Transportation Research and Analytics (SUTRA) is likely to be set up for transportation research and analytics which would help it in making optimised investment decisions.