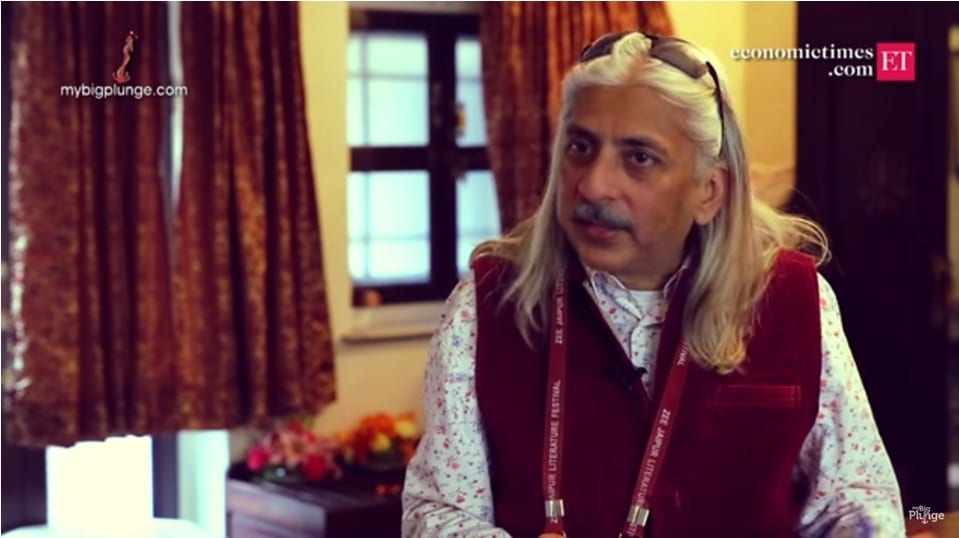 The Festival is a flagship event of Teamwork Arts and is produced by Sanjoy K. Roy.

Having hosted 1300, the Jaipur Literature Festival (JLF) has gone on to become the world’s largest free event of its kind over the decade. Authors and speakers across multiple walks of life are invited from all over the world for the five-day programme set against the backdrop of the beautiful, historic Diggi Palace in Jaipur.

With equity and democracy coursing through the veins of the festival, writers and thinkers from across the globe, from varying fields are brought together on one stage guaranteeing for a fun, enlightening experience.

In celebrating the 10th year anniversary of the Jaipur Literature Festival, the names of the invited speakers are being released ten at a time. We had previously shared the first three lists, here’s the fourth for you:

Returning to the Jaipur Literature Festival is Hari Ram Meena, the winner of the 2012 Bihari Puraskar for his Hindi novel Dhooni Tape Teer. Author of When Arrows Were Heated Up and Travels in the Adivasi World, he is a former IPS officer who was influenced to write novels and poems after inspired by his posting in tribal and dacoit-infested areas.

Also returning to the 2017 edition of the festival is academic, writer, translator and social activist Neerja Matto. Neeraj is among few Kashmiri Pandit women scholars who has kept contact with the academic world in Srinagar in recent times. She was formerly Professor of English and Head of Department of English, Govt. Women College, Srinagar, Kashmir. She has translated a collection of Kashmiri short stories under the title The Stranger Beside Me which has been published by UBSPD. Along with AN Dhar, she has edited a book on Bhagwan Gopi Nath. She has written on women poets of Kashmir, especially on Rupa Bhawani, and recently on Lal Ded.

Bangladeshi poet, entrepreneur and activist, Sadaf Saaz will also be appearing this time. She grew up in the UK studying Molecular Cell Biology at the University of Cambridge and is now the co-director and producer of the Dhaka Literature Festival. She is a strong advocate for women’s rights and her first collection of poetry, Sari Dreams, was published in 2013. She has written a monologue on the experiences of the Bangladeshi women called That Which Cannot Be Said and is currently working on a novel.

Robert Blackwill, writer and diplomat, is a Henry A. Kissinger senior fellow at the Council on Foreign Relations. Blackwill served previously as the U.S. ambassador to India and deputy national advisor at the White House. In 2016 he was awarded the Padma Bhushan Award. His latest book, War by Other Means: Geoeconomics and Statecraft, was published by Harvard University Press.

With her main interest being in Hindi Cinema, Rachel Dwyer has written several books and anthologies on the subject of Hindi Cinema. She is a Professor of Indian Cultures and Cinema at the School of Asian Studies, University of London and her PhD research was on the Gujrati lyrics of Dayaram (1777-1852). Her most recent book is Picture Abhi Baaki Hai: Bollywood As a Guide to Modern India.

Dambisa Moyo is a global economist and author who analyses the macroeconomy and international affairs. She has been named on lists such as Time Magazine’s 100 Most Influential People in 2009 – the year her first book was published – GQ’s 100 Most Connected Women in 2014 and the 25 Most Influential Global Economists. Her writing regularly appears in publications such as the Financial Times and The Wall Street Journal. She is the author of three New York Times bestsellers. Moyo serves on the boards of Barclays Bank, Barrick Gold, SABMiller and Seagate Technology.

Lila Azam Zanganeh will be making her deut visit to the Jaipur Literature Festival. She grew up in Paris to Iranian parents but currently lives and writes in New York and is fluent in seven languages. She contributes literary articles, essays and interviews to The New York Times, Le Monde and The Paris Review and has taught Romance literature and cinema at Harvard University. While her first book was internationally published, her second novel is titled A Tale for Lovers and Madmen.

Returning to the tenth edition of JLF is AN Wilson, who is a prolific and varied writer and newspaper columnist. His works spans satire such as The Vicar of Sorrows, historical fiction including Gentleman in England, biography and historical nonfiction such as The Victorians. His other works in non-fiction include the controversial biography of Irish novelist and philosopher Iris Murdoch – Iris Murdoch As I Knew Her – and The Book of the People: How to Read the Bible. He spent a year training for the priesthood before deciding to focus on his first novel The Sweets of Pimlico.

Hyeonseo Lee is a North Korean defector living in Seoul. Her recent memoir The Girl with Seven Names – A North Korean Defector’s Story, has been published in 18 languages. Over 8 million people have viewed her TED Talk about her life in North Korea, her escape to China and struggle to bring her family to freedom. Oprah described it as ‘the most riveting Ted Talk ever’. She is currently writing her second book with other female North Koreans living in South Korea and is starting an NGO, North Star NK, to help North Korean refugees improve their lives and interact with the international community.

Vladimir Lucian is a writer from St. Lucia whose debut collection of poems, Sounding Ground, was the overall winner of the 2015 OCM Bocas Prize for Caribbean Literature. His poems and criticisms have appeared in The Caribbean Review of Books, PN (Poetry Nation) Review, Wasafiri, Bim Magazine and Small Axe Journal among others.

The Festival is a flagship event of Teamwork Arts, which produces over 25 highly acclaimed performing arts, visual arts and literary festivals across more than 40 cities globally, and is produced by Sanjoy K. Roy. Watch him here discussing with us the making of JLF, controversies et al: