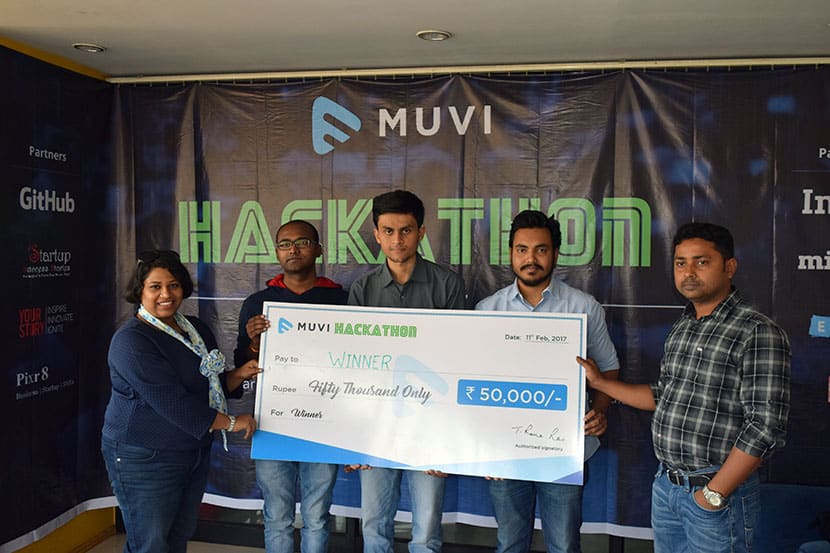 The winners were announced on Monday, a day after the Hackathon, and were awarded respectively at Muvi’s office on Tuesday, 14th February

The company received an overwhelming 250+ registrants and participants from developers’ community in and around the city. The 12-hour non-stop marathon was kicked off by the company’s CTO – Pragyan P which was followed by a great level of enthusiasm up till 8 in the evening, when participants were asked to submit their apps for the judgement.

The day was filled with interesting Tech talks around the common passion to code interesting concepts along with snacking, networking, learning and exchanging interesting ideas.

“Frankly speaking we didn’t expect such a great level of excitement for the event but we’re happy that the youth in Odisha is really excited about technology and is very much willing to experiment their hands on developing unique apps.” stated Pragyan.

Owing to the skills, innovation and efforts put in by the participants, some really unique concepts came up around audio/video service, as per the theme of this Hackathon. The apps developed revolved around concepts like multi-bit rate players, video search algorithms and video sharing social apps. Some off-beat app ideas also spawned that included video anomaly detection, webRTC calling, etc.

The winner of the 30,000 rupee cash prize, Ujjwal Kumar Gupta, built a video player with the ability to play multi bitrate video from scratch. The runner-up position was awarded to Prashant Kumar who developed a searching algorithm for locally stored videos while Sarthak Mishra who had developed a social app for sharing videos, stood as the second runner up. Both these runner ups were presented with a cash prize of Rs. 10,000 each.

Muvi, who is headquartered in New York and has a development center in Bhubaneswar, offered more than 10 participants opportunities for various job offers based on their exceptional skills to code unique concepts.

Wrapping up the contest, Rama Rao, the event coordinator and Muvi’s head of operations, said, “Based on such a wonderful response, we are planning to make Hackathons a part of our Yearly conduct.”