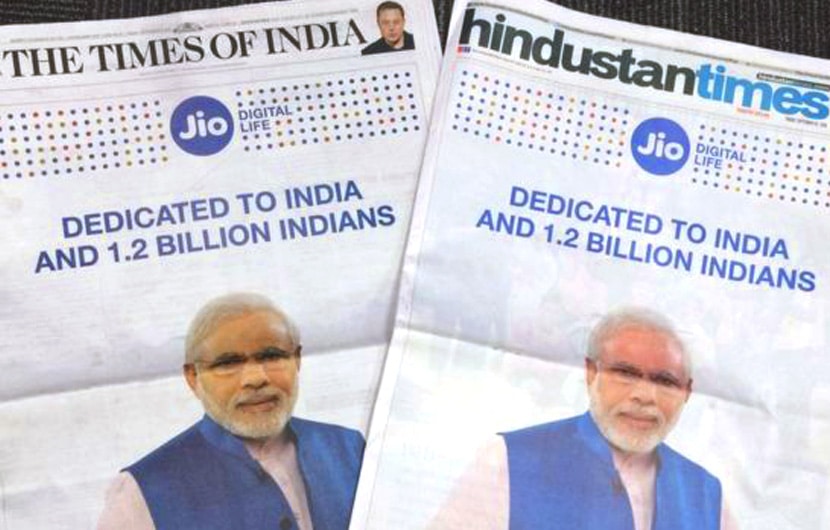 On Thursday, Parliament was told that The Prime Minister’s Office (PMO) did not give permission to Reliance Jio to use images of Prime Minister Narendra Modi in print and electronic advertisements.

According to a report, in reply to a question raised in Rajya Sabha by Neeraj Shekhar of Samajwadi Party, the Minister of State for Information and Broadcasting – Rajyavardhan Singh Rathore – further admitted that they were aware of the Reliance Jio advertisements containing pictures of the Prime Minister.

While stating that no permission was given, Mr. Rathore said: “Yes sir, the government was aware.”

He also pointed out that the nodal agency for releasing advertisements on policies and programmes of the government in various media outputs is the Directorate of Advertising and Visual Publicity (DAVP), which is a media unit of ministry. Adding that it “releases government advertisements only and does not release advertisements of any private body”.


Since Mr. Shekhar wanted to know of the actions being taken against Jio, considering it had not sought permission in advance, Mr. Rathore said that the Ministry of Consumer Affairs, Food and Public Distribution administers the Emblems and Names (Prevention of Improper Use) Act, 1950.

On the other hand, there is Paytm a Chinese Company holding, which magically released advertisements overnight with PM Modi’s pictures the very next morning after the late evening announcement by the PM on the Demonetisation move banning Rs. 1000 and Rs. 500 notes

Little over six months ago, a Pune-based investment group was made to apologise and remove the image of PM Modi from their advertisements for affordable housing. Regardless, it is now clear that Reliance, one of the largest business houses in the country, had risked using our PM’s image without seeking prior permission. However, we are still seeking clarity on what action will be taken against Reliance Jio if any at all.

BSNL to start rolling out 4G network from November